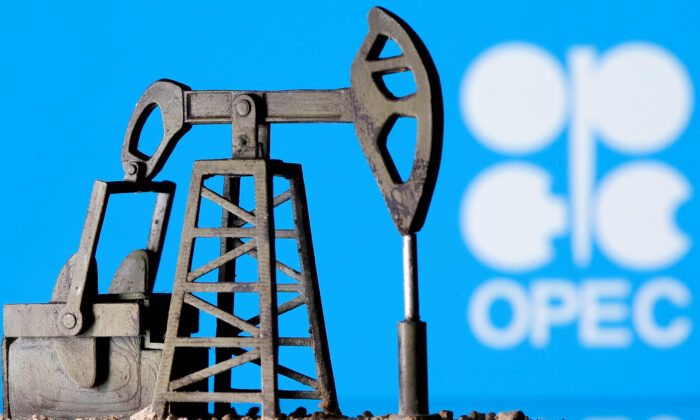 A 3D printed oil pump jack in front of displayed OPEC logo in this illustration picture on April 14, 2020. (Dado Ruvic/Illustration/Reuters)
Gold and Commodities

The Organization of Petroleum Exporting Countries (OPEC) and its crude-producing allies, known collectively as OPEC+, have agreed to a modest boost in oil production in line with a previously agreed schedule, a decision that’s likely to support prices that are at near seven-year highs.

At the OPEC and non-OPEC ministerial meeting on Feb. 2, held via videoconference, the cartel and its allies reaffirmed their earlier commitment to continue gradually raising crude production by 400,000 barrels per day each month.

OPEC members led by Saudi Arabia and non-members led by Russia agreed at the meeting to boost crude production by 400,000 barrels per day in March. With the move, OPEC+ is sticking to its earlier commitment of a gradual reversal of deep cuts of 10 million barrels per day produced in 2020, when the pandemic and subsequent lockdowns decimated economies and oil demand tumbled.

As economies rebounded from the pandemic recession and demand came back online, oil prices have climbed, pushing up prices at the pump and contributing to surging inflation, prompting the United States and allies to press OPEC to pump more oil. Those pleas have been rebuffed, however, with the cartel continuing on its planned gradual path of raising output to pre-pandemic levels.

The cartel’s decision to stick to its existing production-quota-raising schedule comes amid continuing Russia–Ukraine tensions, which have sparked fears of disruptions of oil and gas deliveries to Europe at a time of soaring energy costs.

“The prospect of conflict between Ukraine and Russia has the oil market on edge. In a tight market, any significant disruptions could send prices well above $100 per barrel,” Ben Cahill, senior fellow of energy security and climate change program at the Center for Strategic and International Studies, said in a note.

Oil prices hovered near seven-year highs on Feb. 2, with West Texas Intermediate crude oil futures touching $89.43 per barrel—a seven-year high—before edging down to $87.97 at the time of reporting. Futures contracts for Brent crude, the global benchmark, touched $90.17 before slipping to $88.92 by 12:24 p.m. New York time.

The OPEC+ move to hold fast to its production plan is likely to support oil prices, especially since several members—such as Angola and Nigeria—have been unable to ramp up production due to lagging investment in pumping capacity infrastructure.

“It is official that OPEC is going to stick to the script and raise production by 400,000 barrels a day. Good luck with that,” Phil Flynn, senior market analyst at The PRICE Futures Group, wrote in his latest edition of “The Energy Report.”

Cahill said in his note that markets are concerned that few countries have the spare capacity to absorb shocks, and that “the prospect of supply disruptions—however unlikely—is fueling bullish sentiment.”

A number of analysts have made calls for a $100 per barrel price point for crude given the tight market and geopolitical tensions. While the budgets of OPEC+ members benefit from higher crude prices, they also have a stake in stable price developments, as surging prices could erode demand from transportation and industry.