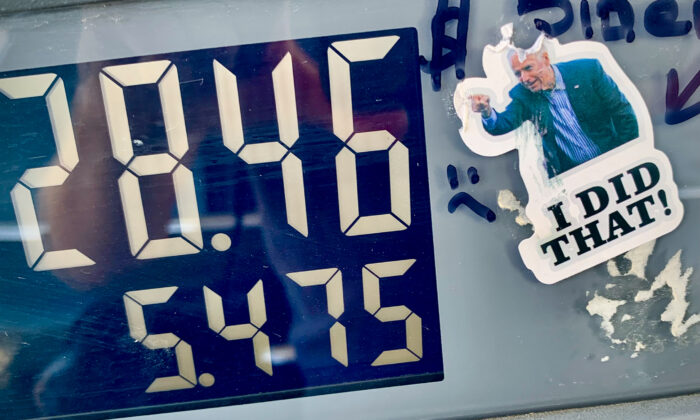 A new opinion editorial argues that President Joe Biden should strive to keep gas prices at their current levels as a measure to reduce carbon dioxide emissions by disincentivizing the use of gasoline-powered private transportation.

In the op-ed, “The Earth Wants Biden to Keep Gas Prices High,” originally published on Bloomberg, economics journalist Eduardo Porter argues that Biden should endeavor to keep gas prices at around $5 per gallon in order to reduce fossil fuel consumption and carbon dioxide emissions.

While Porter admits that such a move is “unlikely,” he insists that so doing would be an effective measure to reduce emissions of carbon dioxide, which many environmental activists claim is largely responsible for manmade climate change.

“Increasing the price of gas is not the same as increasing the price of the CO2 it releases into the atmosphere when burnt, but it’s close enough,” writes Porter. “The beauty of this moment for the president is that he wouldn’t have to deploy any political capital for this to happen. Russia’s invasion of Ukraine already did the trick—sending the average retail price of gasoline above $5 a gallon in early June. All Biden must do is keep it from falling back.”

However, Porter glosses over the likely impact of persistently high gas prices on everyday consumers, who have and would continue to bear the burden of higher prices. If gas prices were to remain around $5 per gallon indefinitely, it would be especially painful for rural and suburban middle-class drivers, who rely on gasoline-powered cars to a far greater extent than most urbanites.

Furthermore, the column ignores that high fuel prices contribute to inflation across all goods, as the higher cost of shipping food, clothing, raw materials, and other products will likely drive up sale prices. With American consumers already grappling with the highest level of inflation seen in four decades, continually high gas prices would exacerbate these troubles.

Perhaps on account of these scruples, Porter’s column has generated significant controversy.

“The liberals now want a $5/gallon MINIMUM price for gasoline so that America is forced to ‘combat climate change[.]’ How out of touch can you be?” asked Libertarian Party Treasurer Todd Hagopian.

Porter’s column arrives hot on the heels of Biden’s declaration of a national “climate emergency,” which follows after several months of stalled negotiations with Sen. Joe Manchin (D-W. Va.) to advance a legislative climate change agenda. With the new announcement, Biden pivots to an approach using his executive powers, but the scope and effectiveness of these powers to address carbon dioxide emissions remains to be seen.