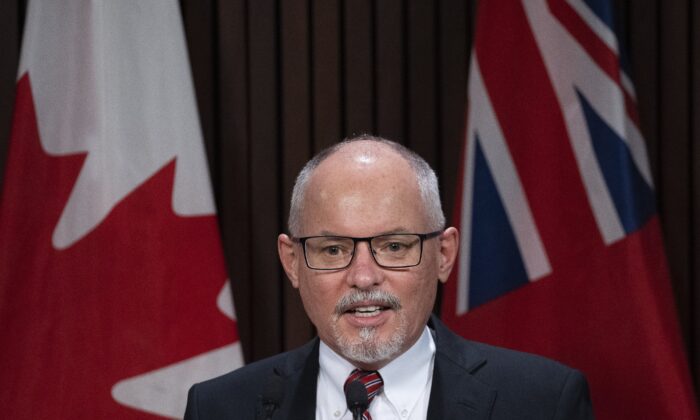 Ontario’s chief medical officer says Quebec’s proposed tax on the unvaccinated is “punitive” and he will not recommend such a measure to his government.

Speaking at a press conference on Jan. 12, Dr. Kieran Moore said Quebec’s proposed financial penalties on those who have not received the COVID-19 vaccine have never been considered by his ministry.

“We have not made that recommendation to [the] government ever throughout this pandemic. It’s not one that we would bring forward. It does, in my mind, seem punitive,” he said.

Moore was responding to a question as to whether the Ontario government will follow Quebec’s approach to tax the unvaccinated, and whether there is any public health value to implementing such a measure.

On Jan. 11, Quebec Premier Francois Legault announced his intention to impose a new “health contribution” on the unvaccinated in the coming weeks. When asked if the penalty would be in the range of $50 or $100, Legault said the amount hasn’t been decided but it will be “significant.”

“I think right now it’s a question of fairness for the 90 percent of the population who made some sacrifices,” he added. “I think we owe them this kind of measure.”

Ontario Premier Doug Ford doubled down on Moore’s comments, saying his province will not follow Quebec’s footsteps either.

“We aren’t going down that road, we’re going to take a different approach,” said Ford during a tour of a vaccination clinic in Toronto on Jan. 12.

Alberta Premier Jason Kenney has also rejected Quebec’s idea, saying it is unfair to make the unvaccinated pay extra even if data shows they put a greater burden on the health care system compared to the vaccinated population.

“If we go down that road, we are completely rubbishing the whole principle of universality of health care, which is why Alberta absolutely will not follow the decision of Quebec,” Kenney said during a Facebook town-hall meeting on Jan. 11.

During the press conference, Moore noted that the COVID-19 vaccines are still relatively “new” when asked why the province has not mandated vaccines in schools in order to increase uptake among children aged 5 to 11.

“It is a new vaccine, and as a result of that, we want greater experience with it before we’d ever mandate it, and I don’t think any jurisdiction in Canada has mandated the vaccine to date,” he said.

Moore, however, noted that Ontario has mandated vaccination for the “highest risk setting” of long-term care facilities.

“The increased risk of severe outcomes had to be balanced by maximizing immunization and protection of those individuals,” he said.

“That is as far as this government has gone in terms of mandating vaccination, and putting a penalty on those who have not been vaccinated has not been entertained by this government.”

Andrew Chen and Noé Chartier contributed to this report