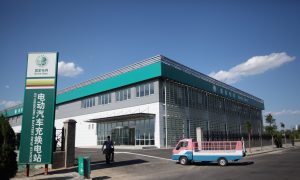 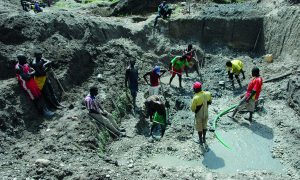 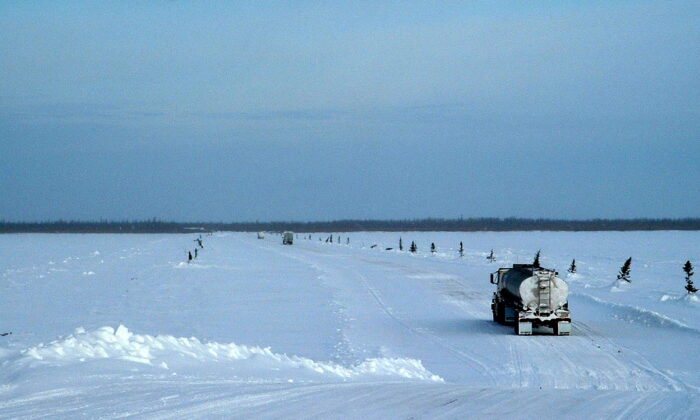 A truck crosses the Albany River on the winter road running from Moosonee to Attawapiskat in the Ring of Fire region in northern Ontario. (Rev40/CC BY-SA 3.0)
Canada

Ontario’s Ring of Fire: Many Hurdles Yet to Be Overcome

The Ring of Fire, northern Ontario’s massive chromite mining and smelting development project, continues to face delays due to challenges like the lack of road access and negotiations with First Nations communities.

Premier Doug Ford has said that the mine is “critical for (his) administration,” but without a rail corridor or smelting capabilities, the extensive chromite deposits in the James Bay Lowlands will stay stranded underground, in the middle of nowhere.

“It’s inaccessible for all practical purposes, except by air, and to sell chrome you’ve got to get it to its steel mills of the world,” said Frank Smeenk, CEO of KWG Resources and one of six mining execs and geologists who located the original cache.

Discovered in 2007 and 2008, word of this chromite motherlode fuelled investment in the Ring of Fire, peaking about a decade ago, after U.S. steel giant Cliffs accepted Smeenk’s invitation to buy a 20 percent stake in KWG.

In the wake of protest and protracted negotiations between nine disaffected Matawa First Nations, and an eventual falling out with Smeenk and KWG, Cliffs shelved plans for a $3.3 billion mine in 2013.

Since then, the market for chromite has flattened while Ford replaced the Liberal government and scrapped a deal that former premier Bob Rae had made with the Indigenous groups. This meant the Ontario government would deal directly with individual First Nations, the aim being to speed up development of the project.

While Rae did not respond to an interview request, Cornelius Wabasse did. He’s the chief of Webequie First Nation, a member of the Matawa First Nations Management Tribal Council.

“We still have a lot of work to do before any major development happens in that area, because of the landscape and also how we’re going to work with the other surrounding communities,” said Wabasse, whose hamlet of 900 is closest to the Ring of Fire.

“So if development starts, we’d have to know how we’re going to prosper. We have to have something in place.”

Webequie is currently proposing a supply road and requisite maintenance to connect the community with Noront Resources’ existing Ring of Fire property, in which Smeenk and KWG also have a stake.

According to the Impact Assessment Agency of Canada, which is reviewing the project, the route could evolve into “a future all-season road network connecting … the provincial highway system in Nakina and/or Pickle Lake.”

Apart from six weeks during the winter, Webequie is a fly-in community nearly two hours north by plane from Thunder Bay. Wabasse said driving the winter road 220 km southwest to Pickle Lake can take around eight or nine hours.

London, U.K.-based diamond mining and trading company De Beers’s quest for new diamond sources after the Second World War saw the first such mine built in this corner of Ontario, but it was Asia’s insatiable economy, emerging fast and furious in the opening decade of the 21st century, that turned investor sights on the region’s metal potential.

The Ring of Fire is about halfway between Webequie and De Beers’s Victor Mine 95 km further to the east, but producing diamonds and mining metal are not analogous, said Smeenk, because “you can put diamonds in your pocket and walk on a plane.”

“Chrome is a little bit like iron. The rock is valuable, but to get that to where it has to be, you need something that can carry a lot of tonnes,” he explained. “You’ve got to start looking at rail.”

And over the last 10 years, between boom and bust in the Ring of Fire and more than $30 million invested in KWG Resources’ fortunes, Smeenk has learned something about rail.

During the investment frenzy and the partnership with Cliffs, KWG staked out the railroad right-of-way; this would ultimately estrange the firms, as Cliffs lost its bid before Ontario’s Mining and Lands Commissioner to override KWG claims on the corridor.

Since then, Smeenk has hired a company to do a “complete construction feasibility study … but how the railroad gets built and who operates it is still up in the air.”

“It could well be a federal transportation authority that maybe starts with a partnership with the Sault Ste. Marie Bridge Authority,” he said.

“Indigenous groups are very much interested in becoming partners on something like this, but they’re the masters of their domain.”

As witnessed in Canada over the last several years, pipeline projects like Northern Gateway have been shelved and the Trans Mountain pipeline expansion remains in relative limbo, because doing business in the frontier means making deals with Indigenous landowners.

“Because the First Nations communities are basically taking a cost-benefit analysis … one of the things we’ve argued for is encouraging Indigenous ownership,” said Joseph Quesnel, Macdonald-Laurier Institute’s lead researcher on the intersection between Indigenous rights and Indigenous resource interests.

“If a First Nation has that kind of a stake, with mining or other projects, especially with profits, that’s good for buy-in for them, and the more you could offer the more eager they would be to come to the table.”

Beyond jobs and other economic benefits, Wabasse is cagey on what Webequie wants apart from the proposal already before federal regulators with the Impact Assessment Agency: road construction to Noront’s property and ongoing maintenance work.

Both Wabasse and Smeenk agree that it’s early days; the soonest an operating mine could materialize through the politics, logistics, and regulatory bureaucracy is in five years.

Smeenk said KWG is willing to partner with any First Nation, if and when the conditions are right.

“But if we formed a 50/50 joint venture … and if they do the mining at say cost plus 5 percent, now they’re in business.”