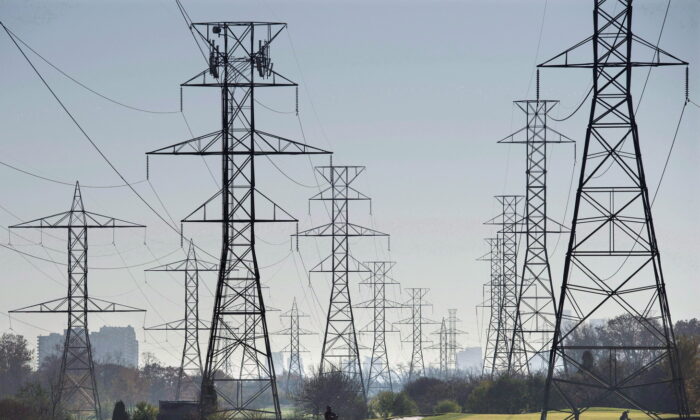 Hydro towers are seen over a golf course in Toronto in a file photo. (The Canadian Press/Darren Calabrese)
By Omid Ghoreishi

Ontario’s electricity sector has been struggling with increasing system costs for over a decade, but the government’s rate subsidies that shift the costs to taxpayers are unsustainable, according to a new report by the C.D. Howe Institute.

“Power Surge: The Causes of (and Solutions to) Ontario’s Electricity Price Rise Since 2006” found that the heart of the problem is the increases in the cost of supply from high-cost energy contracts being spread over less electricity consumption than what was predicted when the contracts were signed.

With the province seeing lower-than-expected electricity consumption, the staggering cost of those contracts became the greatest problem for Ontario’s electricity system, explained the report published June 15.

“As system costs—particularly in energy generation—have continued to rise, the Ontario government has increasingly turned towards taxpayers to keep total bills down,” it says.

According to the report, the latest estimates from the Ontario Ministry of Finance show the cost of subsidies climbing to $6.5 billion for the 2021–22 fiscal year—which translates to nearly 3.5 percent of total government expenditures.

“To put this number in context, that same budget proposed to spend $5.8 billion on long-term care,” the report says.

The authors, Benjamin Dachis and Joel Balyk, offered the Ontario government a multi-pronged solution to the problem.

For medium-sized consumers, the report said the full cost of energy prices should be set on an hourly basis. Residential customers and small businesses that pay regulated energy rates should be offered a lower-price option and an incentive to reduce electricity use during extreme peak demand hours.

It noted that since the privatization of Hydro One, an electricity transmission and distribution utility in Ontario, the company has successfully lowered its annual cost per customer by $90, mostly through reducing administrative costs.

For other distribution companies to emulate this cost reduction, Ontario should implement tax changes to allow cities to attract outside investors, helping to reduce cost for municipal taxpayers.