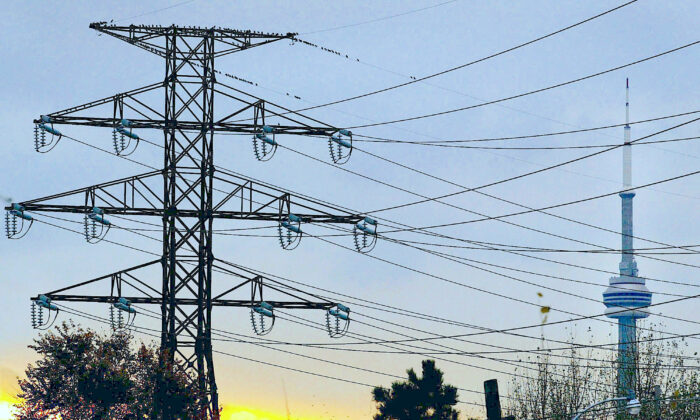 Hydro lines in downtown Toronto with the CN Tower as a backdrop, in a file photo. (CP Photo/Kevin Frayer)
Canada

Ontario Wrestles With How to Meet Future Energy Needs

Ontario is torn between meeting the provincial demand for electricity and a desire to wean itself from fossil fuels.

The province’s Crown corporation responsible for the operation of the electrical system has said that more natural gas generation will be needed in the near term to bridge the gap during the transition and that phasing this out by 2030 would cause rotating blackouts and higher consumer costs.

Regardless, Energy Minister Todd Smith wants the Independent Electricity System Operator (IESO) to report in November on a potential moratorium on new gas plants and a plan to reach zero emissions in the electricity sector. He also asked the IESO to provide recommendations this month on new conservation initiatives.

“We have to ensure that we have a reliable system and one that’s affordable, and if we have an affordable electricity system, then we’re going to see electrification happen in other areas to reduce emissions,” Smith told The Canadian Press.

“All public policy involves tradeoffs, but my criticism of environmentalists is they are completely focused on the environmental sustainability of a particular energy source. Fine and dandy, but then they just refuse to look at the pragmatic questions, such as the economical and financial sustainability, and the availability.”

Lee says Ontario and other provinces have a clear choice—putting more reliance on natural gas.

“Natural gas has got to be the bridge fuel for another 50 years or 70 years. It’s the cleanest of all the fossil fuels. It’s widely available. It’s relatively inexpensive. It’s sustainable. The infrastructure is in place. And yet we are looking for some magical solution out there that isn’t there,” he said.

“We’ve tapped out hydro and oil, and wind and solar are not sustainable. … The wind doesn’t always blow and the sun doesn’t always shine, but we won’t face the music. We need energy. It’s a very large country, a very cold country, and that should be driving us indubitably towards natural gas.”

The Pickering Nuclear Generating Station provides about 14 percent of Ontario’s electricity needs but will start a phased shutdown in 2024. Other nuclear units will be refurbished this decade. Meanwhile, the IESO said it will fill the nuclear gap and keep up with the province’s electricity needs by including more small modular nuclear reactors and storage capacity in its generation portfolio and via new energy efficiency programs.

The IESO expects demand from growth in electric vehicles and electrified public transportation to rise much more quickly starting in 2035, yet it projects a 5,000-megawatt electricity shortfall by then. The amount is equivalent to heating 5 million homes during the summer.

Philip Cross, senior fellow at the Macdonald-Laurier Institute, says governments talk a good line on carbon emissions but the economy is their primary consideration.

Cross said the attempts of the previous Liberal Ontario governments to implement renewables were “disastrous” in their failure to generate electricity as well as their prohibitive cost.

“Going forward, we’re all supposed to be driving electric vehicles over the next 10 years. Where’s that electricity going to come from?” he says.

Carleton University political science professor Scott Bennett says governments in Canada and elsewhere have made “aspirational goals” on climate change policy but have “not confronted the technical and practical realities” required to meet them. He believes the Ford government must reconcile the two.

“The Ontario government has been a little less absorbed with the ‘climate crisis’ than some, but they are now being drawn into some decisions where it will be difficult to avoid taking a clearer position. They should start crafting a policy narrative in terms of a responsible economic and social transition with additional adaptive measures to deal with unavoidable climate issues,” Bennett told The Epoch Times.

“Natural gas generation of electricity is probably the best medium-term compromise. So, unless the government wants to create an energy crisis, they should keep current gas generation plants open and consider building more of them and more nuclear plants for the future.”

Nelson Wiseman, professor emeritus of political science at the University of Toronto, believes the federal imposition of carbon levies, later backed by a Supreme Court of Canada decision, constrains Ontario and other provinces amid looming financial pressures.

“The federal government has a hammer now that I don’t think it had before, and I think that’s what the provincial conservatives are reacting to, rather than their deeply held belief that climate change is a problem,” Wiseman told The Epoch Times, adding that they would “rather cut taxes, and cut the size of government.”

“I feel sorry for them because it’s now going to be tough to govern. Even if Ontario’s economy continues to do relatively well, with the rise in interest rates the cost of servicing Ontario’s debt … is going to increase, and the pressures on the health-care system are just palpable. So they’ve got to push there.”