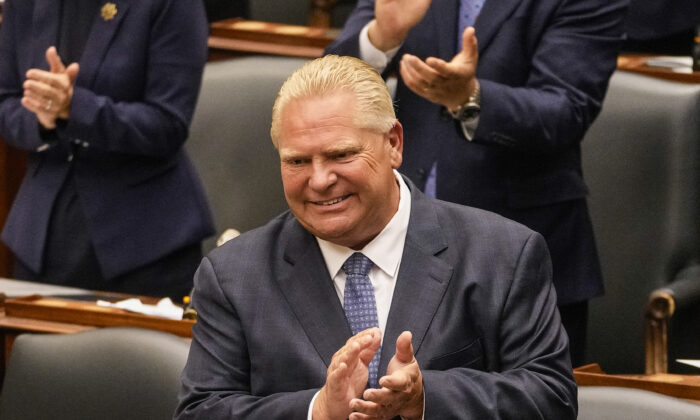 Ontario Will Not Return to COVID Lockdowns in the Future, Ford’s Throne Speech Says

Ontario Premier Doug Ford says the province is well-enough equipped with tools to battle COVID-19 that it will not have to resort to lockdowns in the future.

Lt.-Gov. Elizabeth Dowdeswell delivered Ford’s throne speech on Aug. 9, marking the beginning of a new legislative assembly. The speech said that although COVID-19 is still present in Ontario, the province can now “manage the virus and live with current variants for the long term without returning to lockdowns.”

“That’s because Ontario has one of the highest COVID-19 vaccination rates in the world, with booster doses now available for all adults,” said the speech.

Ford also announced in the throne speech that Health Canada is expected to introduce a new vaccine this fall that will specifically target the Omicron variant.

“When available, the province will be ready to get shots into arms as quickly as possible,” speech said.

Ford’s speech comes as Ontario’s health-care system buckles under the strain of low staffing rates. Health Minister Sylvia Jones called attention to the issue in an Aug. 4 directive, asking the Ontario College of Nurses to register foreign-trained nurses “as expeditiously as possible” to help ease the shortages.

Ford said his Progressive-Conservative Party will be making “unprecedented investments” that will add thousands of nurses and personal support workers to hospitals across the province. He also said that his government will be “making the largest investment in the province’s history to build and expand hospitals across Ontario.”

“Inflation has hit levels not seen in almost four decades, with no broad consensus on the speed with which it will return to normal levels,” it said.

To combat rising inflation rates, Ford said his government will increase Ontario Disability Support Program payments by five percent and raise the province’s minimum wage amount by 50 cents in October 2022, bringing it up to $15.50 an hour.