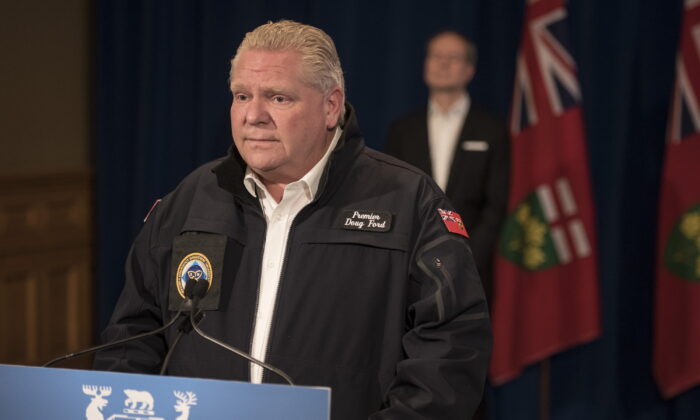 Ontario Premier Doug Ford responds to a question during his daily update regarding COVID-19 at Queen's Park in Toronto on April 25, 2020. (Tijana Martin/The Canadian Press)
Canada

TORONTO—Ontario says its plan to ease restrictions introduced because of the COVID-19 pandemic will happen in three stages, though the steps unveiled today contain few specifics or timelines.

Stage one in the framework published today could include opening select workplaces that can modify operations, such as providing curbside pickup or delivery; opening parks; allowing for more people at certain events such as funerals; and having hospitals resume some non-urgent surgeries.

Stage three would include having all workplaces open and further relaxing rules on public gatherings—though large ones such as sports events and concerts would still be restricted.

The framework says each of the three stages will last about two to four weeks, though it does not provide any specific dates.

At the end of each period, the chief medical officer could advise staying in that stage longer, moving onto the next stage or reintroducing certain restrictions to prevent new outbreaks.

Dr. David Williams will take various factors into account for those decisions, the framework states, including seeing a consistent, two-to-four week decrease in the number of new cases and a decrease in cases that can’t be traced back to a source.

Williams would also need to see fewer new hospitalizations and enough acute and critical care capacity in hospitals, including access to ventilators and a good supply of personal protective equipment.

The gradual reopening will continue until the pandemic has passed or a vaccine is available, the framework says.

Businesses that are reopening will be given guidelines by the government on how to do so safely, including hygiene and sanitation standards and physical distancing measures.

The province recently extended a state of emergency in place since mid-March to mid-May. Public gatherings of more than five people are banned and all non-essential businesses have been closed, as have child-care centres and outdoor recreational amenities.

That brings the total of cases in the province to 14,856, a 2.9 percent increase over Sunday’s total, continuing several days of falling growth rates.

There were 17 more deaths over the previous day in long-term care homes-information that comes from a separate database-and there are now outbreaks in 150 facilities.

Orchard Villa has seen 48 of its residents die, Eatonville has had 37 deaths, and Altamont has seen 32 residents and one personal support worker die.

Seven other long-term care homes in Ontario have had more than 20 residents die in COVID-19 outbreaks.

By Allison Jones and Shawn Jeffords