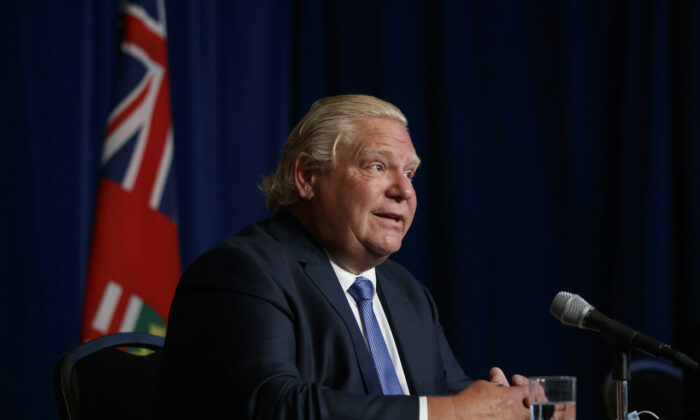 Tackling COVID-19, avoiding lockdowns, and aiming for a recovery based on economic growth were among the priorities laid out in the Ontario government’s throne speech on Oct. 4.

Read by Lt.-Gov. Elizabeth Dowdeswell, the speech kicked off the fall session of the 42nd Parliament of Ontario. It is the first throne speech in over three years from Premier Doug Ford’s Progressive Conservative government.

The speech touted the government’s stringent COVID-19 measures, including having “some of the highest vaccine thresholds for easing restrictions” in Canada, while assuring Ontarians to stay calm as the province enters a “new phase” of the pandemic in the coming winter months.

“As Ontario’s vaccine coverage continues to climb every day, it moves us further into a new phase of the pandemic,” the speech said. “In this new phase, while cases may rise as people head indoors during the colder winter months, the Chief Medical Officer of Health has been clear that this is not a cause for panic.”

“If additional public health measures are needed, they will be localized and targeted.”

The speech comes as a new rule took effect at Queens Park, restricting anyone, including MPPs, from entering the Ontario Legislative Building unless they show proof of having received two full doses of the COVID-19 vaccine or having recently tested negative for the virus.

The government also reassured Ontarians that the province’s vaccine certificate system is a temporary measure.

“Your government did not make the decision to require proof of vaccination easily,” the speech said.

“Your government also recognizes that we cannot live under these exceptional measures forever. Vaccine certificates are a temporary policy that will be lifted when it is safe to do so, in consultation with the Chief Medical Officer of Health.”

The unprecedented level of spending during the pandemic has left Ontario with serious financial challenges, with the province’s projected budget deficit for the 2021-2022 fiscal year hitting $32.4 billion.

In the speech, the Ford government said that it “remains steadfast in its commitment to an economic and fiscal recovery,” which will be fuelled by economic growth rather than tax hikes or spending cuts.

Monday’s speech came as an opportunity for the Ford government to presents its new agenda ahead of the next provincial election. It also marks the first time the legislature has convened since June.

“Today’s Speech from the Throne is disappointing for everyday families and working folks in Ontario,” Horwath said. “By announcing nothing new whatsoever to help patients, students, workers, or small business, Doug Ford made it clear again: he’s not here for you and he still doesn’t want to spend the money on you.”