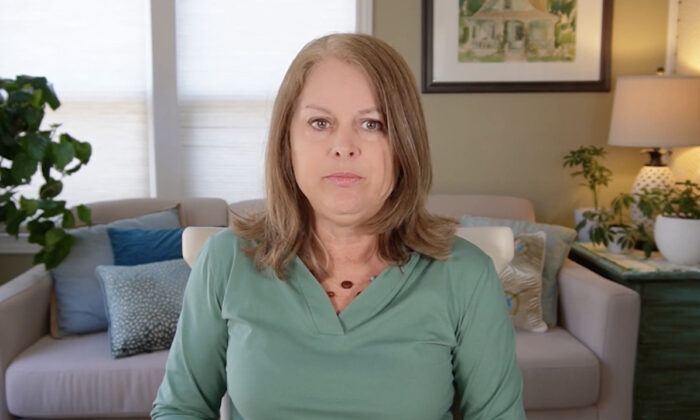 Carolyn Burjoski, a former Waterloo Region District School Board teacher, was ejected from a school board meeting in January 2022 after raising questions about the age-appropriateness of some books in elementary school libraries that deal with gender transition. She says she is filing a second lawsuit against WRDSB over the incident. (Screenshot via The Epoch Times)
Canada

A former elementary teacher has filed her second lawsuit against the Waterloo Region District School Board (WRDSB)—this time to overturn a decision that stopped her from questioning the age-appropriateness of sexual content in children’s books allowed in her school’s library.

Carolyn Burjoski, who worked as a WRDSB teacher for over 20 years, announced her second legal action in a video on June 20, saying that school boards are “abusing their power to silence and shame people who have perfectly reasonable questions.”

“Parents have a right to know what is happening in their children’s schools and to voice their concerns. Boards must respect the rights of parents and teachers to free expression,” she said.

Burjoski said she has asked the Ontario Superior Court of Justice to undertake a judicial review of the WRDSB’s decision to eject her from a board meeting on Jan. 17, wherein she made a presentation outlining her concerns that the books would sexualize young children.

Announcing my second legal action: a Judicial Review of WRDSB's decision to halt my delegation last January. My lawyers @JCCF will argue @WRDSB violated my Charter Rights & that #WRDSB be ordered to let me return to #wrdsbmtg to finish my presentation in full. pic.twitter.com/4aKIwW79Wc

The retired teacher said she was registered as a delegation to the Board of Trustees meeting at the time and was allotted 10 minutes to speak.

“During my presentation, I read excerpts from two children’s books available in our elementary school libraries, and I criticized the age-appropriateness of the sexual content,” she said.

One of the books was “Rick” by Alex Gina, in which the main character, a young boy named Rick, questions his sexuality because he doesn’t think about naked girls like his friends do. He later declares an asexual identity after joining the school’s rainbow club.

The second book was “The Other Boy” by M.G. Hennessy, in which the female character identifies as a boy and takes puberty blockers and testosterone as part of her medical sex transition.

“Less than four minutes into my presentation, the board chair claimed that I had violated the Human Rights Code, and he ejected me from the meeting,” Burjoski said, referring to Scott Piatkowski, who took the helm as chair in 2021.

Based on ‘False Claim’

On her personal website, Burjoski included a link to a segment of the unpublished video which showed several board members challenging Piatkowski’s decision, but were eventually defeated in a 5-4 vote to have Burjoski ejected.

The Justice Centre for Constitutional Freedoms (JCCF), which is handling Burjoski’s case pro-bono, says the board’s decision is based on the “false claim” that she violated the Human Rights Code, and demonstrates “a serious lack of understanding and respect for basic democratic principles” and “cannot go unchallenged.”

“The Board’s decision to silence her not only deprives her of her right to freedom of expression under the Charter of Rights and Freedoms, but also deprives the public of hearing an informed dissenting voice on an issue that affects their children,” said Jorge Pineda, a lawyer for JCCF, in a statement on June 20.

“Justice Centre lawyers will argue in the Ontario Superior Court of Justice that the decision to muzzle Ms. Burjoski was a violation of her Charter right to freedom of expression,” the statement added.

The Epoch Times reached out to the WRDSB for comment. In response, spokesperson Estefanía Brandenstein said “we are not able to discuss ongoing legal matters.”

Burjoski’s first legal action against the WRDSB was launched on May 4 when she filed a defamation suit against the board and Piatkowski after he gave interviews to multiple media outlets, claiming that her comments during the meeting were “transphobic.”

“I became the centre of a national media frenzy, fuelled by statements made by the board chair on radio, TV, and social media. He attributed to me remarks that I did not make, characterized them as hateful, and accused me of violating the Human Rights Code,” Burjoski said in a video on May 4.

She added that the day after the meeting, she was told by human resources that she was “assigned to home” and prohibited from speaking to her students and colleagues while pending a formal disciplinary investigation.

Burjoski, who retired on Jan. 31, said investigators summoned her for questioning five days before her retirement, where she said she was required to sign a “gag order.”

The investigation was halted when her doctor placed her on medical leave after she suffered a breakdown from extreme anxiety on Jan. 22 and was taken to hospital, Burjoski said in the video.

In her latest video, Burjoski said one must stand up to “bullies.”

“Years ago at a WRDSB anti-bullying workshop, I learned that victims and bystanders must stand together to confront bullies, or the bullies just get stronger,” she said.

“I am asking the court to overturn the board’s decision to stop my presentation because I did not violate the Ontario Human Rights Code,” she added.

“I am asking the court to order the board to allow me to return to the trustees meeting, where I hope to deliver my presentation in full.”

Burjoski said she hopes the judicial review will deter other school boards from engaging in similar practices against dissident voices.

“My goal is that this legal action sets a precedent that will dissuade school boards from attempting to use human rights codes to intimidate and silence voices that challenge their policies and ideology,” she said.

Andrew Chen contributed to this report