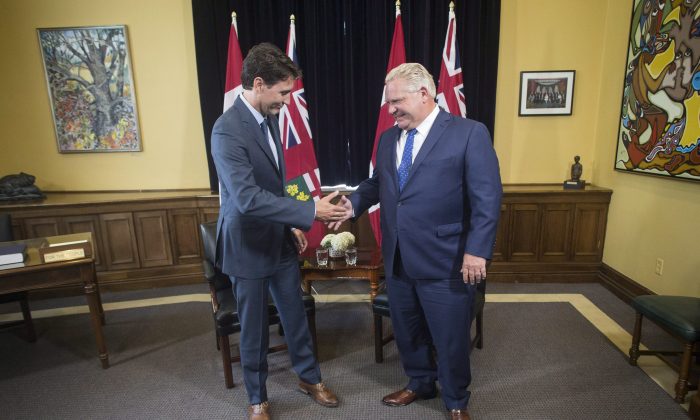 TORONTO—The Ontario government says Ottawa is to blame for a housing crisis caused by people crossing the border illegally and should pay all the costs.

A spokesman for Premier Doug Ford said Thursday the federal government has encouraged people to cross into Canada illegally and continues to usher people across the U.S.-Quebec border into Ontario.

“This has resulted in a housing crisis and threats to the services that Ontario families depend on,” Simon Jefferies said in a statement.

The comments came shortly before Ford met with Prime Minister Justin Trudeau at the Ontario legislature.

The two highlighted their common ground as they spoke to reporters before the meeting.

“There might be a few things that we might disagree on but there’s one thing that the prime minister and I agree on,” Ford said as the two sat next to each other in his office.

“One is the economy, making sure we create great paying jobs for all Canadians and all Ontarians. We’re going to sit down and have a chat.”

Trudeau, meanwhile, stressed the need for collaboration across all levels of government.

“Yes, there will be areas where we have disagreements but in general we are focused on serving Ontarians, serving Canadians in the best possible way,” he said.

The federal government recently pledged to give Ontario, Quebec, and Manitoba $50 million to help offset some of the costs incurred due to the influx of asylum seekers illegally crossing the Canada-U.S. border.

The provinces, however, have asked for much more support.

Quebec, which has seen the bulk of asylum seekers arrive this year, has said its costs are closer to $146 million, though that tally includes projections for future expenses. The province is set to receive $36 million from Ottawa.

Ontario has been promised $11 million by the federal government but Toronto Mayor John Tory has said the city alone needs $64 million to recoup costs.

Federal Immigration Minister Ahmed Hussen has said the money is meant to help address some of the immediate temporary housing needs in those provinces.