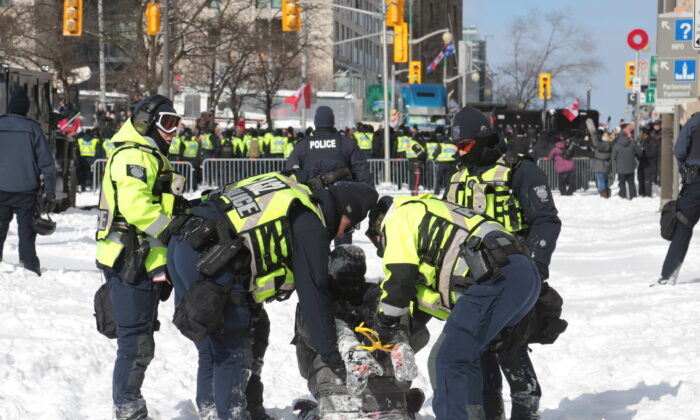 Officers drag a man away from the protest in Ottawa on Feb. 18, 2022. (Richard Moore/The Epoch Times)
Canada

Ontario Provincial Police commissioner says the Freedom Convoy protest movement was identified as a “threat to national security” around Feb. 7, about a week after protesters had arrived in Ottawa and around the time protesters started blocking the Ambassador Bridge border crossing in Windsor, Ont.

OPP Commissioner Thomas Carrique’s comment was in response to a question by NDP MP Alistair MacGregor, who asked why protesters were allowed to set up in front of Parliament Hill since he said intelligence assessment from the federal Integrated Terrorism Assessment Centre (ITAC) released before the convoy arrived in Ottawa had said “extremists” were involved.

Carrique was testifying before the House of Commons Standing Committee on Public Safety on March 24.

A Feb. 17 report published in The Guardian cites an ITAC report that says while “the organizers have declared that this is an act of peaceful protest, some ideologically motivated violent extremism followers in Canada have seized upon this rally to advocate for their own ideological objectives.”

It adds that “a coordinated, complex terrorist attack or planned storming Parliament or other federal locations is unlikely.” The report doesn’t clarify how the intelligence document was obtained.

Freedom Convoy organizers have maintained that their movement was peaceful, and have distanced themselves from some of the vocal protesters who have expressed extreme views.

Carrique said the protest movement was identified as a national security threat “through the provincial operational Intelligence Bureau on or about the 7th of February.”

Feb. 7 is the day the blockade of the Ambassador Bridge in Windsor started. Beforehand, the cross-country truck convoy had arrived in Ottawa on Jan. 28, and the Coutts border blockade started a few days after on Jan. 30.

The protest movement’s objective was to demand the lifting of COVID-19 mandates and restrictions. Government officials and several MPs have claimed that the protesters meant to overthrow the government, a charge Freedom Convoy protesters deny.

“I want to be very clear that our intent has always been, and always will be, to talk to the official government of Canada,” Freedom Convoy spokesperson Tom Marazzo said in Ottawa on Feb. 20. “I have stood at this podium, I have done other media events where I have outlined a plan, and I’ve said ‘I would like to talk to you.’”

During the protests, Prime Minister Justin Trudeau refused to talk to the protesters or send government representative to hear their grievances.

The federal government invoked the Emergencies Act on Feb. 14, after the Ambassador Bridge border crossing, which accounts for about US$360 million in trade daily, was cleared by police on Feb. 12 and the Coutts border-crossing in Alberta was cleared voluntarily.

By the time the government invoked the public emergency, the blockade at the Emerson border crossing  in Manitoba was still in place, but it dispersed without police action on Feb. 16.

The measures provided by the Emergencies Act were only used to clear the protest in Ottawa.

Carrique told the committee the act was an “extremely valuable tool.”

“We were able to utilize a number of the powers in the Emergencies Act, specifically prohibiting people from attending designated areas, limiting the presence of children—which created a significant public safety risk—compelling service providers to assist with the removal of vehicles that required heavy tows, providing indemnification for those service providers and the freezing of accounts. These tools made our operation very effective.”

Ottawa Police Service (OPS) interim chief Steve Bell also testified before the committee and related his organization’s involvement. He said that every year hundreds of protests take place in Ottawa, but this one was “unprecedented.”

“The protesters brought thousands of vehicles to our city with the full intention of disrupting our capital.”

Bell also said the invoking of the Emergencies Act was a “critical piece” to clear the protest.

Conservative MP Dane Lloyd asked Bell if any loaded shotguns were found with the protesters during the removal operation, since the reporter behind the Feb. 17 Guardian story had published a claim to that effect from a reported anonymous police source in the Toronto Star.

“Fears that there were weapons inside some of the trucks proved prescient: A police source said loaded shotguns were found,” says the Toronto Start article.

Bell told the committee that police didn’t lay any firearms-related charges, but said investigations are continuing in relation to “weapons possessions,” without elaborating the type of weapons that are being investigated and whether they include firearms.

Not satisfied with the answer, Lloyd repeatedly pressed for a “yes or no” answer.

“No, not to relating to any charges to this point,” Bell said.

Lloyd charged that the Star article was misinformation spread by the journalist and a member of the government, since the article was retweeted by Minister of Crown-Indigenous Relations Marc Miller, citing the quote alleging “loaded shotguns” were found at the protest site in Ottawa.

Since the emergence of the convoy protests, sparked by the federal government’s COVID-19 vaccine mandate for cross-border truck drivers, a number of claims have been made by opponents of the protest movement, including politicians, which have been contradicted by expert testimony or police investigation.

During the clearing of the Ottawa protest on Feb. 18 to 19, the OPS initially said via its Twitter account that no one had been seriously injured after mounted police were seen knocking down and trampling protesters, including a woman using a mobility scooter.

That woman was later identified as Tyendinaga Mohawk Candice Sero. In an interview with Rebel News, she said she suffered a broken collarbone from the incident and that she was kicked by police while down on the ground. The incident is being reviewed by Ontario’s Special Investigations Unit.

The OPS also initially said it had not used gas on protesters, but Rebel News reporter Alexa Lavoie was shot point-blank with a tear gas canister while on the front line.

The federal government has claimed without providing supporting information that the movement was “largely foreign-funded.”

“These illegal blockades are being heavily supported by individuals in the United States and from elsewhere around the world. We see that roughly half of the funding that is flowing to the barricaders here is coming from the United States,” Trudeau said in the House of Commons on Feb. 17.

However, GoFundMe, which hosted a fundraiser for the Freedom Convoy amounting to over $10 million before it was removed under pressure by Canadian officials, said at a Public Safety Committee hearing on March 3 that 88 percent of the funds originated in Canada and that 86 percent of the donors were from Canada.

Public Safety Minister Marco Mendicino said on Feb. 16 that the individuals arrested with weapons in Coutts on serious charges were connected to organizers of the protest in Ottawa. When pressed for details, Mendicino, whose department oversees national intelligence and law enforcement agencies, cited information from social media.

Several politicians including Ottawa Mayor Jim Watson linked an alleged arson in an Ottawa apartment building to protesters, but the OPS said this week the suspect charged with the incident was not connected to the protest activity.