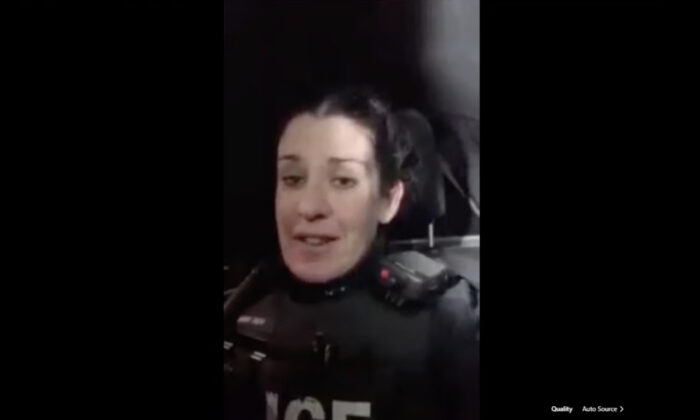 An Ontario police officer is facing disciplinary charges for recording a video while in uniform in which she voiced support for the truckers’ Freedom Convoy protest earlier this year.

Constable Erin Howard of the Durham Regional Police is charged with two counts each of discreditable conduct, insubordination, and breach of confidence under the Police Service Act, according to CBC News.

In January, Howard posted a minute-long video on social media calling the truck drivers “true heroes” fighting for rights and freedom, as convoys of trucks rolled across Canada towards the national capital to protest against federal COVID-19 vaccine mandates for cross-border truckers.

“I really wanted to give a shout-out to all the truckers. I think what you guys are doing is incredible,” she said.

Arriving in Ottawa on Jan. 29, the Freedom Convoy protesters parked in the city’s downtown core for over three weeks, sparking parallel protests across the country and around the world, as people joined the call to end all COVID-19 public health mandates and restrictions. In solidarity, groups of protesters blockaded several key Canada-U.S. border crossings in Alberta, British Columbia, Manitoba, and Ontario.

On Feb. 14, Prime Minister Justin Trudeau invoked the Emergencies Act to grant additional powers to the police to remove the protesters in Ottawa and at the border crossings, though the blockades at the borders had largely ended by that time.

In her video, Howard said she was speaking on behalf of the group Police on Guard for Thee composed of active duty and retired police officers. The group has been vocal against the federal government’s COVID-19 emergency measures they say are “in conflict with our Charter Oath but also place active duty police officers in an untenable position” when they are directed to enforce the measures.

Following the release of her video, the Durham Regional Police said Howard’s remarks do not reflect their views and opinions, prompting Police on Guard to release a statement on Jan. 25 in support of Howard.

“Police on Guard is so proud of Constable Erin Howard in her brave stand for her oath, the Charter, and our truckers who believe in the same,” said the statement.

Howard is scheduled to make her first appearance before an Ontario Civilian Police Commission investigative tribunal on May 5.