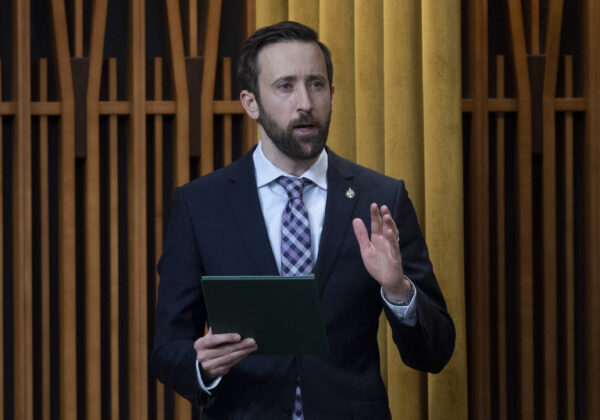 Independent member of Parliament Derek Sloan rises during question period in the House of Commons in Ottawa on Feb. 5, 2021. (The Canadian Press/Adrian Wyld)
Canada

Ontario Party Leader Derek Sloan is objecting to his party’s exclusion from the Ontario election leaders’ debate that took place on May 16, saying it puts his party at a disadvantage. The New Blue Party which, like the Ontario Party, has a sitting MPP in the current legislature, is also objecting.

“This is more election interference by the elites, just like when Big Tech banned my Twitter account for saying things they didn’t like,” Sloan, a former Conservative MP, said in a May 17 press release.

“Preventing the leader of a political party with a sitting MPP from participating in leadership debates is nothing less than election tampering and is a profoundly anti-democratic act.”

According to the press release, the Ontario Party has 105 registered candidates running in the current election.

The New Blue Party led by Jim Karahalios was also barred from the debate despite registering a full slate of 124 candidates and having a sitting MPP. Responding to the exclusion, Karahalios accused the consortium of bias and violating its own rules.

“Secret [media] consortium broke their own rules to deny democracy knowing [the New Blue Party] would win a debate!” he said on Twitter on May 15.

Mike Schreiner, leader of the Green Party of Ontario, was allowed to participate despite the party having only one MPP, making it the first time in history the Greens participated in the televised leaders’ debate.

“It will be a historic night,” Schreiner said in an interview with CTV on May 16.

“This is the first time a fourth party has been included in the televised leaders’ debate and I think it’s a great opportunity for the people of Ontario to hear about new solutions and new ideas to a lot of the old problems many of us are facing right now.”