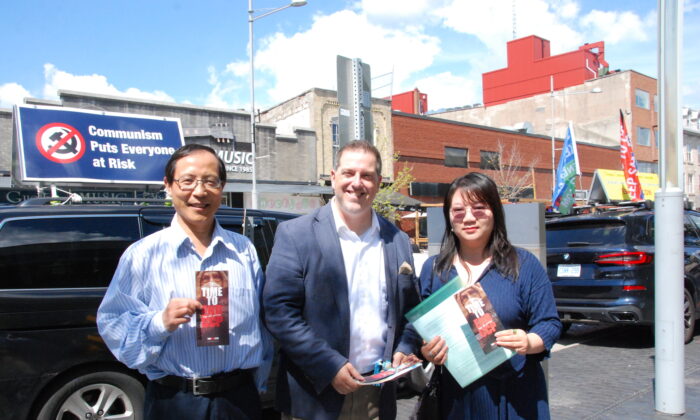 The mayor of Guelph, Ont., took part in a car parade celebration marking the historic milestone of 400 million people denouncing their ties to the Chinese Communist Party (CCP) and its affiliated associations, while praising the organizers’ efforts to raise awareness of the human rights abuses in communist-led countries.

“We live in a free country. We’re very fortunate here in Canada to have that freedom, freedom of speech,” Mayor Cam Guthrie said at the event in Guelph on Aug. 18.

Meeting with participants of what was described as the “End CCP” car parade, Guthrie said the event was able to “bring awareness for not only what’s happening with other communist countries but to make sure that we maintain the freedom here in Canada, too.”

“It’s very nice to see so many people come together to make sure that we bring awareness to the issue here even in Guelph, and so I appreciate that,” he said.

The car parade in Guelph was part of a month-long celebration held in dozens of cities across Canada since Aug. 3, when the number of Chinese people who denounced their ties to the CCP and its related organizations in the “three withdrawals” movement surpassed 400 million.

The movement, called “Santui” in Chinese, began in 2004 following the publication of The Epoch Times book “Nine Commentaries on the Communist Party,” which details the history of the CCP and its crimes against the Chinese people. The grassroots effort gives the Chinese people an opportunity to disassociate themselves from the CCP and its affiliated organizations—the Communist Youth League (YL) and the China Young Pioneers (YP)—which children and youth are mandated to join in order to enroll in most schools in the country from elementary to high school-age.

An organizer of the car parade told The Epoch Times that events have been held in at least 25 municipalities in or near the Greater Toronto Area, including Barrie, Kitchener, and Waterloo. A total of more than 100 car parades are being planned from August to mid-September in several Canadian provinces: Alberta, British Columbia, Manitoba, Ontario, and Quebec. Similar rallies are also held in cities around the world.

“People are becoming more aware of what freedom can actually give to people, then it’s contagious,” Guthrie said of the movement.

“And the more people that become aware, with freedom of information, freedom of voice, freedom of elections and democracy, that enables people to understand communism, and what it really is, which is something that really no one should embrace.”

Since the CCP established the People’s Republic of China under its one-party rule in 1949, an estimated 60 million to 80 million Chinese people have died of unnatural causes, according to the Nine Commentaries. Many perished under the regime’s political movements, such as during the Cultural Revolution from 1966 to 1976, the ongoing persecution of adherents of the spiritual practice Falun Gong, and the imprisonment of millions of ethnic and religious minorities in Xinjiang and Tibet.

‘I Didn’t Know What Was Freedom’

Emily Wang, a Chinese immigrant who came to Canada as an international student 20 years ago, said that under the totalitarian rule of the CCP, many people in China don’t know what true freedom is.

“Before coming to Canada, I didn’t know what was freedom, democracy, because I’ve never seen it [in China],” said Wang, who joined the car parade in Guelph.

“In China, the information is controlled, the information [people] received is modified and false,” she said. “[Internet censorship] stops people from accessing Google and Twitter; the people don’t have the freedom to information.”

Wang also called on Canadians to learn about the CCP’s long history of crimes against its own people and to beware of the Chinese regime’s influence on Canadian soil.

Guthrie, who has served as the mayor of the City of Guelph since 2014, also urged people in free societies to defend their freedom and democracy.

“That we always fight for freedom, and fight for democracy, and to make sure that we fight for fair elections, and choice—choice for people,” he said. “Those are really the foundational things that I think we need for not only Guelph, or Ontario, or Canada, but the world.”