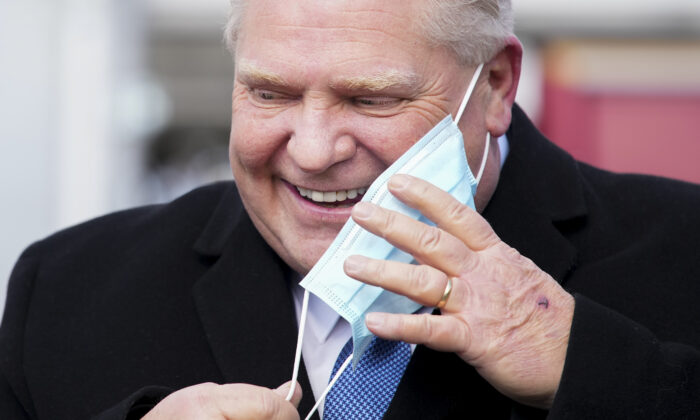 Ontario Premier Doug Ford smiles as he removes his mask before making an announcement during a press conference in Toronto on March 3, 2022. (The Canadian Press/Nathan Denette)
Canada

Ontarians no longer need to wear masks in schools, retail settings, and most other public places starting today.

Premier Doug Ford thanked residents in a Twitter post on March 21, saying their cooperation has led Ontario to this new stage of exiting the COVID-19 pandemic.

“Today marks an important milestone in our fight with COVID. Thanks to your hard work, sacrifice and willingness to rise to the occasion, Ontario is now at a place where we can safely remove the mask mandate in most settings,” he wrote.

On March 9, Ontario’s Chief Medical Officer of Health Dr. Kieran Moore announced the removal of mandatory masking rules for most public settings, with the exception of certain congregated indoor spaces such as public transit, health care settings, long-term care homes, and shelters. The province plans to end all mask mandates and remaining public health rules by the end of April.

In his response letters, Moore said now that the peak of the Omicron variant has passed, the province is ready to “take a more balanced and longer-term approach to the province’s pandemic response,” including in Ontario’s schools.

Wearing masks is no longer mandatory in many other provinces in Canada, including Alberta, British Columbia, Manitoba, Saskatchewan, Newfoundland and Labrador, New Brunswick, and Nova Scotia.

In Alberta, the masking mandate was discarded in most settings along with most COVID-19 measures on March 1. Masks are still required in some settings, including on municipal and intra-provincial public transit for Albertans aged 13 and older, Alberta Health Services contracted facilities, and all continuing care settings.

B.C. reached the milestone in returning to pre-pandemic normalcy on March 10, as it lifted mask mandates in most settings on March 11, though the government says individual businesses and event organizers can continue requiring masks on their premises. In a news release, the B.C. government said K to 12 students will also return to mask-free classrooms when they return from spring break.

Manitoba dropped its masking mandate on March 15, except in health-care facilities.

Mandatory indoor masking has been ended in Saskatchewan since Feb. 28, though businesses, workplaces, and event organizers in the province may still request patrons, visitors, or staff to continue wearing masks.

In line with Ontario, Nova Scotia also lifts its mask mandates in most public indoor places on March 21, though the measure will remain in public schools for staff, students, and visitors for a few more weeks.

“I know there will be mixed emotions among students and parents about the decision to keep masks on for a little longer,” Premier Tim Houston said in a news release. “But when we have new information, we reassess.”

The remaining provinces are also set to lift their masking mandate next month.

In Quebec, mask mandates were already removed in elementary and high school classrooms starting March 7, and the province is scheduled further drop the measure in other settings by mid-April.

Prince Edward Island plans to lift the restriction on April 7 as it enters the final stage of its three-step plan to ease COVID-19 measures.