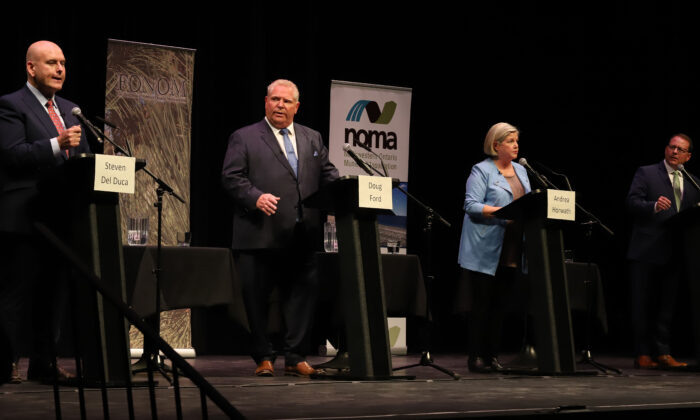 Party leaders take part in a debate ahead of the Ontario provincial election at the Capitol Centre in North Bay, Ont., on May 10, 2022. (The Canadian Press/Gino Donato)
Canada

The next Ontario election leaders’ debate will be hosted on Monday night, this time in the provincial capital, Toronto, ahead of the June 2 election.

The debate, taking place at the TVO Broadcast Centre, will be from 6:30 p.m. to 8 p.m. EST, and moderated by TVO’s Steve Paikin and Toronto Star’s Althia Raj.

In the last debate, which took place in North Bay last week on May 10, the leaders fielded questions pertaining particularly to housing and transportation in the Northern region of Ontario.

Causing controversy in this second debate, however, are the rules from the broadcast consortium running the debate that has advised the debate will be “open to all major party leaders running candidates in all Ontario ridings that currently have an elected MPP sitting in the provincial legislature.”

Moreover, a provincial leader, according to these rules, would have to be running on a full slate of 124 candidates in order to qualify for the debate.

This sparked confusion around whether Steven Del Duca and his Liberals should be able to qualify with only 122 candidates after three were recently dropped due to their controversial remarks.

“So reading the rules released by the broadcasters’ partnership for the Ontario leaders’ debate, it seems that Steven Del Duca is not eligible,” said former NDP strategist Karl Belanger on Twitter on May 15 in response to the controversy.

Last week, the Liberals decided to terminate the candidacy of Alec Muzarek, the party’s candidate for the Chatham-Kent-Leamington riding, over Facebook comments he made 8 years prior, at age 15, that were said to be homophobic in nature.

The party also dropped their candidate for Parry Sound-Muskoka, Barry Stanley, in the same week due to a book he previously authored that reportedly expressed controversial views on homosexuality. The party dropped another candidate, 18-year-old Aidan Kallioinen in Sault Ste. Marie, for comments he allegedly made in an online gaming forum that were deemed derogatory.

Epoch Times contacted Mackay Taggart, the spokesperson for the broadcast consortium, for comment but didn’t receive a response by publication time.

In a statement, Taggart previously told the Toronto Sun that “The spirit of the criteria the consortium uses to invite parties to take part in the debate is intended to give Ontarians a chance to hear from leading parties most likely to form a government in the province.”

“This criteria includes having a sitting MPP at the time of dissolution who was elected to the legislature as a member of that party, having a clear, identifiable platform, and running candidates in all, or mostly all, ridings in the province,” he said.

In a tweet reacting to Taggart’s comments, Belanger said the consortium was changing the rules.

“So “all ridings” becomes “mostly all ridings”. It is not a clarification. It is a modification,” he wrote.

While Del Duca’s Liberals are included in the debate, the New Blue Party led by Jim Karahalios is not, despite the party having a candidate running in all of the 124 ridings in the province.

In response, Karahalios said the broadcast consortium is biased and breaking its own rules to exclude the New Blue Party from the debates.

“The media wants to act like the New Blue Party doesn’t exist, because they know if Ontarians got to see us, our support would grow every day,” he said in a phone call with the Epoch Times.

The Ontario Party, led by Derek Sloan, was also contacted for comment but did not respond by publication time.