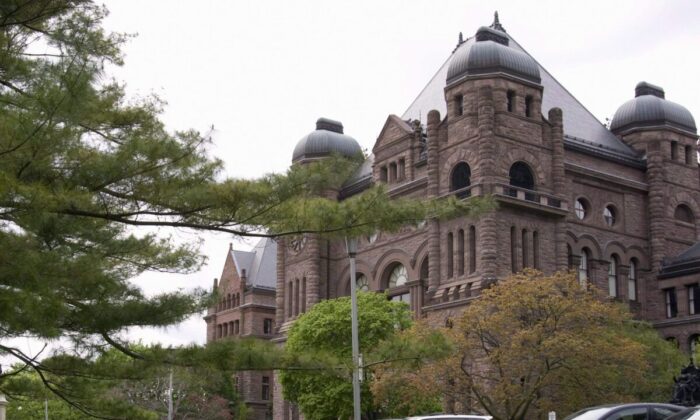 The Ontario Legislature in a file photo. (The Canadian Press/Frank Gunn)
Canada

The Ontario legislature has cancelled an event to raise the flag of the People’s Republic of China. The event, scheduled for Sept. 30, was criticized due to the ongoing hostile attitude China has taken toward Canada, including the arrest of two Canadian citizens.

Jackie Gordon, the sergeant-at-arms of the Legislative Assembly of Ontario, said the decision to cancel stems from health concerns amid the pandemic.

“In light of the rising number of Covid 19 cases and the recommendations by Public Health authorities to be more vigilant than ever, the Legislative Assembly of Ontario has decided to cancel all flag raising ceremonies until further notice,” Gordon told The Epoch Times in an email.

The event was criticized by the federal Conservative Party’s foreign affairs critic Michael Chong, who told the Globe and Mail such events send “a certain signal.”

“I don’t think any order of government in Canada should be flying the flag of the People’s Republic of China while two Canadian citizens are wrongfully imprisoned in China,” Chong said.

David Mulroney, a former Canadian ambassador to China, said on Twitter that the province avoided trouble this time by using the “COVID defence,” but said the incident shows that Canada is an easy target for Beijing.

“The right outcome, but this sorry incident illustrates why China invests in influence operations in Canada: we’re easy pickings. People can’t be bothered to pay attention–or care,” he said.

The Chinese communist regime detained Canadians Michael Kovrig and Michael Spavor shortly after the arrest of Huawei executive Meng Wanzhou in Vancouver on an extradition request from the United States. China has also sentenced four Canadians to death on drug charges in the last two years, and blocked imports of Canadian agricultural products.

The flag-raising event was requested by the Confederation of Toronto Chinese Canadian Organizations (CTCCO), which is known to take pro-Beijing positions. Asked why the  legislature had initially agreed to hold the event, Gordon said “the Ontario Legislature is apolitical.”

CTCCO has taken a strong stance against pro-democracy protesters in Hong Kong, and has supported Beijing’s national security law for Hong Kong. The group also protested the Dalai Lama’s visit to Canada in 2010, and in 2004 worked to stop a motion by the City of Toronto in support of Falun Gong, a spiritual discipline persecuted by the Chinese regime.

In February 2017, then-consul general Xue Bing of the Chinese Consulate General in Toronto attended the 15th inauguration ceremony of the executives of CTCCO and presented a letter of appointment to each newly appointed executive, according to online Chinese records.

In 2014, the organization held a welcome dinner for the head of China’s Overseas Chinese Affairs Office, a key part of Beijing’s espionage and control apparatus. In the same year, the group was among a number of other pro-Beijing groups pushing the Toronto District School Board to keep its partnership with Beijing’s Confucius Institute.