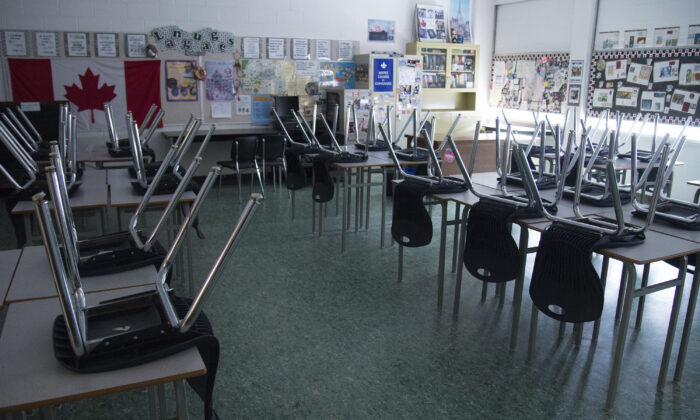 Ontario Joins Other Provinces in Delaying Return to School

Ontario is joining the majority of Canada’s provinces to delay the return to school due to rising COVID-19 cases.

Students in Ontario will return to classroom learning on Jan. 5, 2022, which will give schools extra time to put in place additional health and safety measures, including implementing additional masking options for students and educators and further improving air ventilation in schools, Chief Medical Officer Dr. Kieran Moore said in a press conference on Thursday.

“I and colleagues from across Ontario have always maintained that schools should be the last to close and the first to open. It is critical to the positive mental health and academic success of our children,” Moore said.

When asked why Ontario’s postponement period is two days while the other provinces that also decided to delay the return to school are opting for one week, Moore said the province has preemptively distributed 11 million rapid tests for schools to ensure students who test positive do not return to school immediately.

On Thursday, Ontario reported a record-high for single-day new cases of 13,807, breaking the last highest record of 10,436 cases reported on Wednesday.

British Columbia announced Wednesday that the full return to in-person learning for students in kindergarten to Grade 12 will be delayed in order to give both public health and schools time to implement the enhanced COVID-19 measures.

Officials said in a news release that students in kindergarten to Grade 12 will return to school on Jan. 10, while staff will return on Jan. 3 and 4. Schools will remain open to a limited number of students with particular needs.

“This extra time will allow the Ministry of Education and public health to better understand the impact of the Omicron variant on the education system, and school communities to prepare for students returning to class with enhanced safety measures,” B.C. Education Minister Jennifer Whiteside said.

Additional safety measures are expected to be in place once students return to school, including a pause on extracurricular sports tournaments, policies to avoid crowding during class transition times, and rearrangement of the classroom environment to maximize space between people. School gatherings like staff-only meetings are encouraged to be held virtually.

Newfoundland and Labrador also announced a change of plan on Wednesday, bringing students back to remote learning starting Jan. 4. N.L. Premier Andrew Furey said the government will reevaluate the decision of switching to online learning on a weekly basis and will return students to in-person classroom learning as soon as possible.

Nova Scotia extended the holiday break to give families additional time to monitor for COVID-19 symptoms before students return to in-person schooling on Jan. 10, the province’s Education Minister Becky Druhan announced Tuesday. Teachers and school staff will return on Jan. 4.

Manitoba, Prince Edward Island, and Quebec were the first provinces to announce delays in returning to in-person schooling to give public health officials additional time to assess the risks of Omicron. Students in all three provinces are schedulaed to return to classroom learning on Jan. 10.

In P.E.I., schools will start contacting students on Jan. 4 to ensure they have access to the necessary tools for remote learning, which will begin on Jan. 5. Employers are also encouraged to allow more flexibility for parents arranging for childcare.

Meanwhile, the Ontario government is mulling whether to reopen schools, and will announce the final decision in the coming days.

“We just want to see how things go,” Ontario Premier Doug Ford said Tuesday, adding that the decision will be announced following discussions with the chief medical officer.

On Wednesday, opposition parties urged the government to deliver a clear back-to-school plan, as parents are growing increasingly anxious with the days counting down.

“It’s just ridiculous that with only days to go, no one knows what’s happening Monday,” New Democrat Leader Andrea Horwath said in an emailed statement.

Horwath said the NDP holds the position that schools should not be closed if big box stores and sports stadiums remain open to massive crowds.