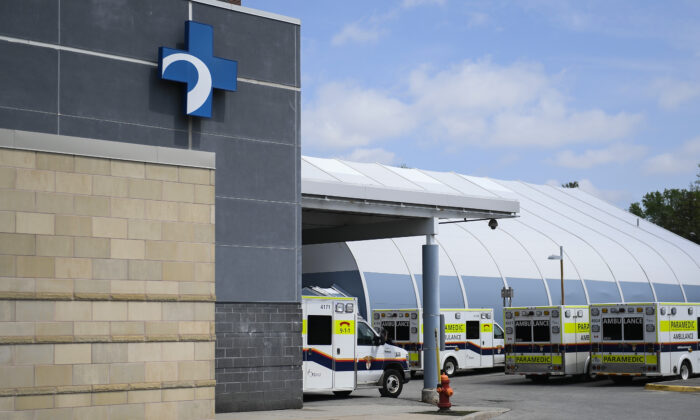 Ambulances are parked outside the Emergency Department at the Ottawa Hospital Civic Campus in Ottawa on May 16, 2022. (Justin Tang/The Canadian Press)
Canada

3 Ontario Doctors Die Suddenly Within Days of Each Other

Hospitals in Ontario are mourning three doctors in the Greater Toronto Area who suddenly died within days of each other over the past week.

“Dr. Jakub Sawicki, Dr. Stephen McKenzie, and Dr. Lorne Segall were respected physicians who dedicated their lives to caring for their patients and community,” Trillium Health Partners said in a statement on social media.

“It is with deep sadness that THP mourns the loss of three of our physicians who recently passed away.”

A spokesperson at Trillium Health declined to provide details of the causes of the deaths, citing the need to protect their health information.

Segall, a 49-year-old otolaryngologist at Credit Valley Hospital, passed away on July 17 after a “ridiculously unfair and hard fought year-long battle with advanced lung cancer,” his obituary reads.

The three deaths came shortly after hospitals in the Peel region started to administer the fourth dose of COVID-19 vaccines to adult residents on July 14.

However, Trillium Health, which operates hospitals in Toronto and Mississauga, said in another tweet that the rumour circulating on social media connecting the doctors’ deaths to the COVID-19 vaccine are “simply not true.”

Following the release of the news of the doctors’ deaths, several hospitals in the Ontario health-care network sent their condolences.

“From all of us at Sunnybrook, please accept our deepest sympathies and sincere condolences,” Sunnybrook Health Sciences Centre said on Twitter, adding that the doctors will be remembered for their commitments to health care and the health of their communities.

“Our hearts reach out to each of the families during this time. We hope they are able to seek counselling for their grief and find peace within themselves knowing these physicians spent their lives honourable saving others,” Homewood Health said on social media.

Another GTA doctor, Dr. Paul Hannam, who serves as the chief of emergency medicine at North York General Hospital, also died suddenly while running on July 18. Hannam was an Olympic sailor and marathon runner.