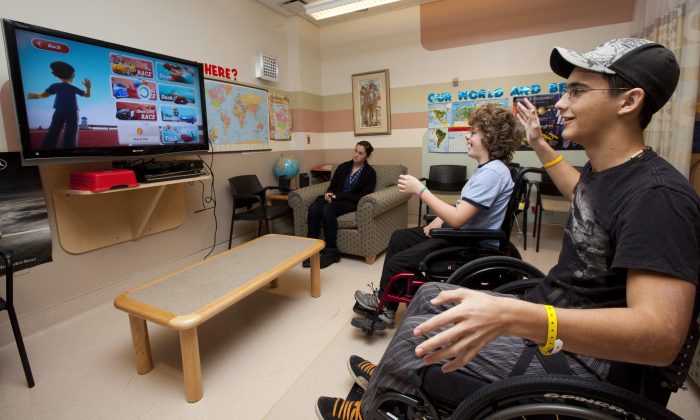 Patients at the Children's Hospital of Eastern Ontario play with a motion-tracking video game, Dec. 3, 2010. CHEO has launched a legal challenge against the U.S. patent holders of genes related to a rare heart disorder. (The Canadian Press/Sean Kilpatrick)
Canada

An Ontario hospital known as a leader in genetic care and research has launched a legal challenge against the U.S. patent holders of genes related to a rare heart disorder.

The case, brought forward by the Children’s Hospital of Eastern Ontario (CHEO), could reshape how gene patents are handled by universities, hospitals, companies and private and public laboratories across Canada and clarify the murkiness of current laws.

“We don’t know if [the U.S.] patents are valid or not and we suspect they aren’t,” said Sana Halwani, council at Gilbert’s LLP, which is representing CHEO in the case.

“We have doctors and physicians at CHEO that are very frustrated by the fact that they can’t deliver the level of patient care that they want to deliver.”

The case revolves around gene patents related to Long QT syndrome, a potentially fatal heart rhythm disorder that causes irregular heartbeats. Tests to detect the disease exist in the U.S., but the patents are held in the U.S. by the University of Utah Research Foundation, Yale University, and Genzyme Genetics—meaning researchers must gain permission to use the tests.

“Our perspective is because of the way technology has moved along and the type of technology that CHEO wants to use to do the testing that they would not infringe on any claims of any patents,” said Halwani, who is among several participants involved in the case on a pro-bono basis.

The case has “the potential to create a very significant precedent,” she said.

Dr. Julie Richer, a clinical geneticist and professor at the University of Ottawa, explains that Long QT Syndrome appears in one of 2,500 people in Canada. The original gene mapping was an international effort, she notes.

“Really, the reason we are launching this legal challenge is to protect the future of genomic medicine,” she explains.

“First, let’s say I was to run the test on a sick newborn in the intensive care unit. Let’s say the lab stumbled upon the fact that the baby also happened to have Long QT syndrome. Right now the patent could prevent the laboratory from telling anybody. The doctor taking care of the baby wouldn’t know, the family wouldn’t know—nobody would know and this child would not be treated.”

Dr. Richard Gold at McGill University’s Faculty of Law and Faculty of Medicine, who is also involved in the case, said the patents “are really hurting innovation.”

“The whole team is doing this so that hospitals and industry know what the rules are and hopefully open up the sector to Canadian innovators,” he said.

“This case will basically clear the weeds and allow innovation to happen.”

According to Gold, the issue of gene patenting has been debated worldwide. In Europe, through the late 80s and late 90s it was actively debated whether a patent should be issued for live animals. In a 1998 decision the EU allowed it, but it was subject to limitations based on certain ethical cases. In France, for instance, the health minister can override a patent if it affects access to health care.

“There are some countries, like in Latin America, virtually all of them never allowed it. It has always been outside of what can be patented. In the United States, as of last summer we have a ruling that says the type of gene claims that are being made from here on are invalid,” said Gold.

“In Australia, it is currently being debated through the court and now there is an appeal up to the highest court in Australia.”