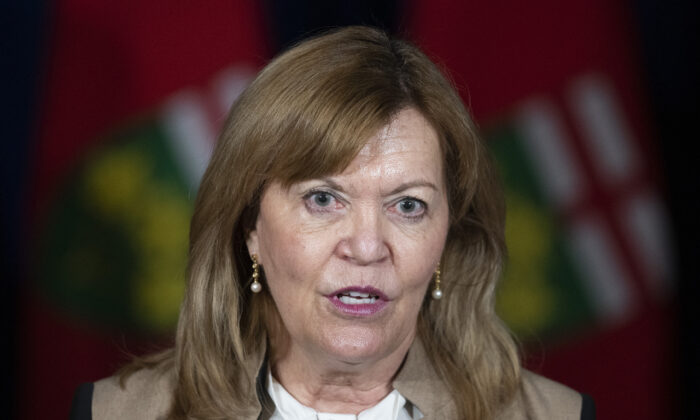 Christine Elliott, Ontario's Deputy Premier and Minister of Health, speaks regarding the easing of restrictions during the COVID-19 pandemic in Toronto on Jan. 20, 2022. (The Canadian Press/Nathan Denette)
Canada

Ontario’s health minister said today that the province will not immediately follow other jurisdictions in dropping its vaccine passport system, while the mask mandate will also remain in place “for some time to come.”

Christine Elliott said that the province will lift its Directive 2, which ordered hospitals to halt non-urgent surgeries, “in the coming days,” and begin a “gradual and cautious” resumption of non-urgent or non-emergent surgeries and procedures.

“We’ve already set out our opening timelines and started on Jan. 31. The next phase is as of Feb. 21, and then March 14. We have no plans currently to drop the passport vaccination situation or masking. We believe that masking is going to be important for some time to come,” Elliott said during a press conference in Kitchener, Ont.

Several provinces have recently announced their plans to end their COVID-19 vaccine passport programs and other pandemic restrictions.

In Alberta, the proof of vaccination requirement ended on Feb. 8, and capacity limits were lifted for all businesses except larger venues of over 500 people. The province will also remove the rule requiring children to wear masks in schools starting Feb. 14.

Saskatchewan Premier Scott Moe also announced on Feb. 8 that the province will terminate its vaccine passport mandate starting Feb. 14. Mask requirements in the province will also expire by the end of February.

The Quebec government has announced plans to lift most COVID-19 restrictions by March 14, though masking and proof-of-vaccination requirements will remain in place until further notice.

Last month, the Ontario government had released a roadmap outlining the steps for the province to lift public health measures, though it doesn’t specify when masking or the proof of vaccination requirement would be lifted.

Elliott did not respond directly when asked whether Ontario will move to reduce the need or eliminate vaccine passports before March 14, saying “we are willing to change if necessary” based on the number of hospitalizations and recommendations from the province’s chief medical officer of health.

“We are looking at the evidence on a daily basis as well. The trends are going in a good direction now, but we can’t sit back on our laurels and assume that it’s going to always continue,” Elliott said.

“We are not telling the people of Ontario that this [policy] is going to remain in place forever. No. But we’re not in the clear just yet. And so we need to continue to protect Ontarians, protect each other, with the [vaccine] passports and with the masks at this point.”