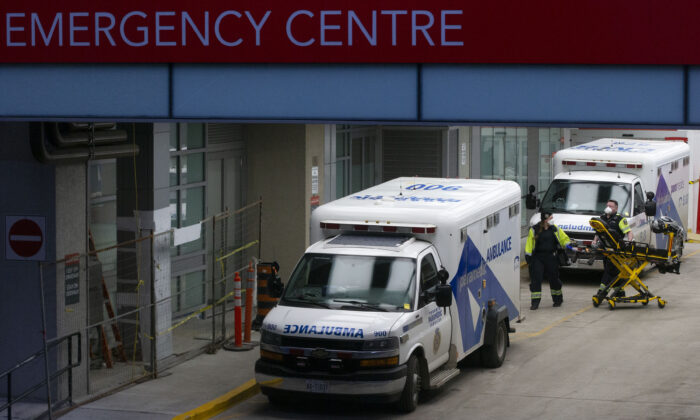 Paramedics push a gurney towards an ambulance outside a Toronto Hospital on Jan. 5, 2022. (The Canadian Press/Chris Young)
Canada

Ontario’s new COVID-19 directive to suspend all non-urgent surgeries and procedures took effect on Jan. 5, applying to both hospitals and independent clinics.

Ontario’s Chief Medical Officer of Health Dr. Kieran Moore announced the so-called “Directive #2” (pdf) earlier this week, instructing hospitals and health care providers to halt all non-emergent and non-urgent surgeries and procedures in order to preserve critical care and human resource capacity in the healthcare system in light of rising infection cases due to the Omicron variant.

While the policy mainly regulates hospitals with patients slated to undergo surgeries or procedures, a Health Ministry spokesperson told CP24 on Jan. 5 that other independent clinics and health facilities are also required to pause all “non-urgent/non-emergency procedures that require surgical nursing support or anesthesia health human resources.”

“This is consistent with what was previously in place with Directive #2 and helps to ensure that health human resources remain available to support the province’s COVID-19 response,” the spokesperson said.

In addition to non-urgent surgeries in hospitals, the new directive also bans procedures in dental settings that carry the risk of a patient requiring “emergency medical services or other hospital services” or that require “a sedation or anesthetic team.” Surgery in a dental setting that meets these criteria must be urgent and emergent in order to proceed.

Moore suggested that the directive could help health facilities free up between 1,200 to 1,500 beds, which he said will be “essential to be able to provide oxygen and care” to those who are infected with Omicron in the coming weeks.

He also said earlier this week that the hospitalization rate is expected to increase rapidly over the coming weeks, reaching its peak by the end of January before descending.

“Specifically, cases are at the highest level since the start of the pandemic (>18,000 per day) and a continued acceleration in cases, and increased hospitalizations are expected throughout January 2022,” Moore said in the directive.

While Omicron is found to be more transmissible than previous COVID-19 variants, a string of studies have shown that the variant causes less severe illnesses. Countries that have experienced an Omicron outbreak before Canada have so far had relatively fewer hospitalizations in relation to the number of cases.

World Health Organization official Abdi Mahamud confirmed on Jan. 4 that more evidence is emerging that the Omicron variant is causing milder symptoms than previous variants, resulting in a “decoupling” in some countries between high case numbers and low death rates.