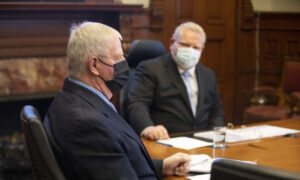 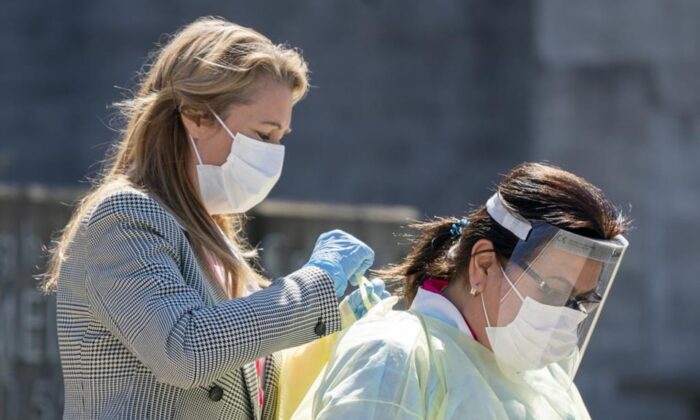 Two health care workers gown up on the sidewalk before going in to Meighen Manor seniors home in Toronto, on April 20, 2020. (The Canadian Press/Frank Gunn)
Canada

Ontario faced a shortage of personal protective equipment at the onset of the COVID-19 pandemic in part because it did not replenish its stockpiles over the previous years, an independent commission examining the impact of the health crisis on long-term care has heard.

Ontario’s former deputy minister of health and long-term care, Bob Bell, told the independent commission that the province’s supply of personal protective equipment should have been refilled around 2017 or 2018, under the previous and current provincial regimes.

Bell, who served as deputy minister for four years until mid-2018 and now chairs an advisory panel for the Revera chain of nursing homes, said there was no conscious decision to let the stockpiles dwindle. The issue simply fell through the cracks, he said.

“In the midst of everything else that goes on in government, the decision to replenish stockpiles was not undertaken as an affirmative action kind of thing that should have been done,” he said in his Dec. 21 testimony that was posted online recently.

He also said the move to destroy expired N95 respirators was, in hindsight, “not a smart decision” because only the elastic posed a potential problem and the masks still had “ventilatory capacity.”

As a result, he said, there was not enough personal protective equipment in the provincial health system when the COVID-19 pandemic hit early last year, and skyrocketing demand made it difficult to obtain once the crisis began.

What’s more, the personal protective equipment that was available was largely earmarked for hospitals rather than long-term care, he said.

“We also focused the stocks distributed to the hospital sector thinking that, should a pandemic arise … the response will be led by hospitals,” he said.

“That’s what happened in 2003 [with SARS]. That’s what would have happened with Ebola, and that’s where we focused our stocks of PPE.”

Dr. Samir K. Sinha, director of geriatrics for the Sinai Health System and the University Health Network, told the commission that other jurisdictions, such as British Columbia, were able to deploy their supply of personal protective equipment more efficiently than Ontario and get it to the long-term care system faster.

Sinha, who is also on the Revera advisory panel, said the B.C. government took control of the province’s entire supply of personal protective equipment and distributed it with a science-based approach, preventing any “unnecessary hoarding.”

“As they had prioritized long-term care and congregated care settings early on, they were able to actually get PPE very quickly to those settings, including to primary care practices, much earlier on than we were able to get in Ontario,” he said.

A spokesperson for the Ministry of Health said that since the start of the pandemic, the government has spent nearly $1.1 billion on PPE and other supplies.

David Jensen said the ministry also worked to determine if its expired N95 respirators could safely be used in a clinical setting, and recommended using them for fit testing to cut back on the use of non-expired PPE.

“We continue to make significant progress in securing the necessary personal protective equipment needed to effectively respond to COVID-19,” he said.

More than 2,900 long-term care residents and 10 staff members have died as a result of COVID-19 since the start of the pandemic. Of the province’s 626 long-term care homes, 218 reported an active outbreak on Thursday.

The independent commission, led by the Superior Court’s associate chief justice Frank Marrocco, isn’t open to the public, but transcripts of testimony are later posted online.