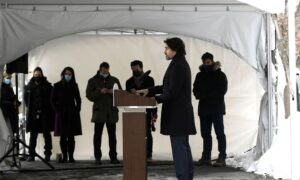 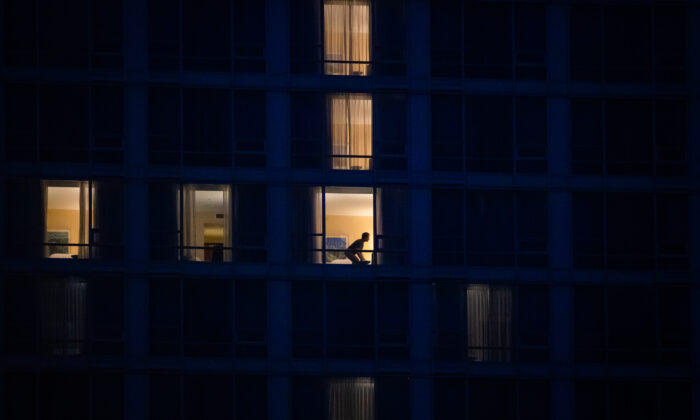 A person is seen in a room at a government-authorized COVID-19 quarantine hotel in Richmond, B.C., Canada, on Feb. 28, 2021. (Darryl Dyck/The Canadian Press)
Canada

Ontario Family Vows to Fight $3,458 Bill for One Night at Mandatory Quarantine Hotel

An Ontario family has vowed to fight the $3,458 bill that a 4-star hotel in Toronto charged them for their temporary stay for mandatory quarantine.

Under Canada’s travel restrictions, starting Feb. 21, travellers, unless exempted, are required to reserve a government-authorized hotel for 3 nights to quarantine before boarding a flight to the country.

Cristine Teixeira arrived in Canada with her brother and daughter on Feb. 27, after attending her father’s funeral in Portugal.

Teixeira said it was impossible to get any information about the mandatory hotel program while overseas, and officials in Toronto later denied her request to be exempted from the program for compassionate reasons.

Teixeira said she was unable to make reservations before landing in Toronto, and she was told to book a room at the nearby Crowne Plaza Hotel upon arrival.

She said, during her call to the hotel, she was told the price would be $369 per night for a room with two queen beds.

“When we got there to check in, all of a sudden our price went up from $369 per night to $769 per night plus tax,” Teixeira told CTV News. “They knew there were three of us. They didn’t give us the right information.”

However, roughly 15 hours later, the family received negative COVID-19 test results, which would allow them to complete the remaining quarantine period at home.

But Teixeira said when they were leaving, the family was denied a refund for the remaining two nights they did not spend at the hotel. Her credit card was ultimately charged $3,458 for their reservation from Feb. 27 and March 1, with taxes and other fees included.

Teixeira told CTV News that the rate for three people staying in the same room would have been $179 if they had walked in off the street, and they are now prepared to do everything they can to fight the charges.

“We’re fighting the charges because it’s price gouging at its best,” she said. “It’s ludicrous.”

She said they plan to file a complaint to the Ontario government’s “Report price gouging related to COVID-19” webpage.

Teixeira said she has also reached out to her local Conservative MPP Lindsey Park, who referred them to their MP Erin O’Toole, but has not yet received a response.

The family has also received another bill from the hotel, stating that the total charge for their stay was $2,453, rather than the $3,458 shown on Teixeira’s credit card.

“My brother has tried to work out the whole situation with the hotel,” she said. “The person that he was talking to couldn’t explain the difference of between the bill and what was charged.”

Teixeira was told that a hotel manager would call them, but they still have not been contacted.

A spokesperson for IHG Hotels and Resorts, which owns the Crowne Plaza Hotel, told CTV News that they are “aware of this matter and have been addressing with the hotel,” but couldn’t comment further on “individual bookings.”

Crowne Plaza Hotel and IHG Hotels and Resorts didn’t respond to a request for comment from The Epoch Times.