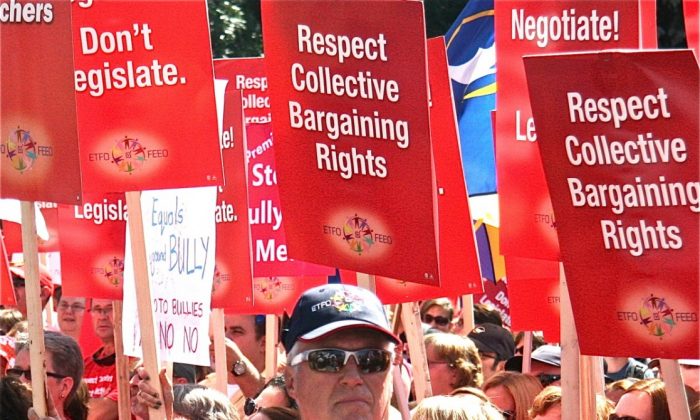 Ontario teachers crowd Queen’s Park on Aug. 28, 2012, to protest Bill 115. The Elementary Teachers' Federation of Ontario has announced that teachers in more school district boards will be holding one-day strikes in protest of the bill known as Putting Students First Act. (Kristina Skorbach/The Epoch Times)
US

TORONTO—School boards across Ontario are announcing rotating walkouts, with notices being handed out to parents and announcements posted on school board websites.

First to hold a political strike on Monday, Dec. 10, will be the teachers and occasional teachers of public elementary schools in the Avon Maitland District School Board, just west of Waterloo.

Joining them will be elementary school teachers of the District School Board Ontario North East.

Around 10,260 students in the 40 elementary schools of the Avon Maitland District School Board will be affected by the strikes.

On Thursday morning, Dec. 6, after teachers with the first two school boards said they would walk out, Ontario Education Minister Laurel Broten said the government would act if the job action grew beyond those day strikes.

“If additional strike dates are threatened, then we will act to force the strike to stop,” she said.

Teachers are protesting Bill 115 that was introduced earlier this summer, giving the government the power to impose collective agreements and stop school strikes or lockouts.

“ETFO teachers, occasional teachers, education support personnel, professional support personnel, and designated early childhood educators are saying they will lead the protest against Bill 115 if the education minister denies them their fundamental rights,” said Sam Hammond, president of the Elementary Teachers’ Federation of Ontario (ETFO), in a release.

According to the ETFO, 92 percent of over 46,000 members who participated in an online vote held Dec. 2-4 voted in favour of a one-day political protest. The ETFO represents some 76,000 members.

According to Hammond, the vote underlines the power of the democratic process and the teachers had little option other than staging the protests.

“Bill 115 is an affront to the fundamental rights not only of educators but of all Ontarians. By this vote, our members are saying they are prepared to stand up for democracy,” he said in the same release.

The Ontario government has the power to stop strikes, but it will allow for one-day rotating strikes across the province if teachers provide notice to parents three days in advance.

“Teachers have a democratic right to strike in the Province of Ontario, and we’ve got to weigh that off against the right of parents and students to have stability in their schools.

“We just don’t believe that a one-day strike warrants the heavy hand of government by way of an intervention,” Premier Dalton McGuinty told the press in a Thursday interview.

Public secondary school teachers are not going to strike alongside their public elementary school peers as of yet, but they are refraining from heading extra-curricular activities at schools and are not attending any board meetings as a way of protest.