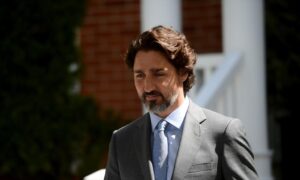 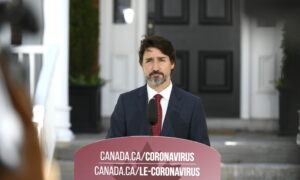 Contact Tracing App to Control Spread of Covid-19 Soon to Be Rolled out in Ontario, Nationwide
0 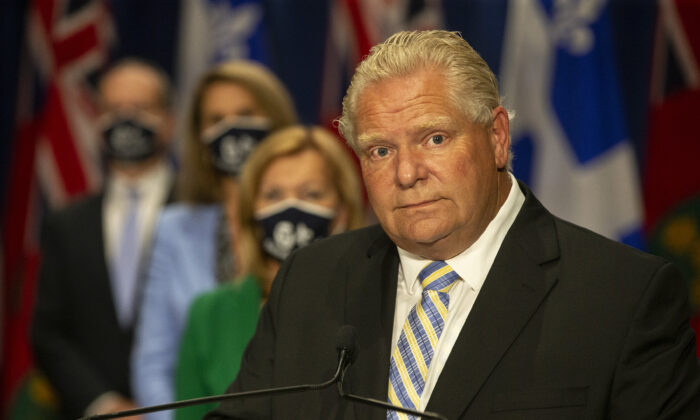 Ontario Premier Doug Ford, right, stands in front of a selection of his cabinet ministers during a joint press conference with Quebec Premier Francois Legault at the Ontario-Quebec Summit, in Toronto on Sept. 9, 2020. (Chris Young/The Canadian Press)
Canada

Ontario is amid an upswing in COVID-19 cases that signals the second wave is coming, warned Premier Doug Ford in a press conference Sept. 14 with senior members of his cabinet.

The Ontario Ministry of Health confirmed 313 new COVID-19 cases Monday, making it the fourth straight day the province surpassed the 200 mark since June.

“78 percent of today’s cases are from three regions, with 112 in Toronto, 71 in Peel, and 60 in Ottawa,” Ontario health minister Christine Elliott tweeted Monday.

In response to the rise, Ontario Premier Doug Ford told reporters  at Queen’s Park that the spike is a “cause for concern for all of us,” and warned that the “second wave of this virus is coming.”

Ford said how severe the second wave will be was up to the 14.5 million people in the province.

“We’ve shown what we can achieve when we work together,” said Ford, noting efforts that flattened the curve in the first wave.

And Ford said he wanted to be clear that the province would do whatever was needed.

“Every option is on the table. We will take every step necessary including further shutdown,” said Ford.

Elliott, who was also present at the press conference, urged Ontarians to continue to follow the public health guidance to stop the spread.

“Please continue with the physical distancing or wear a mask where that is not safe to do so, or practical to do so,” Elliott said. “Follow the proper hand hygiene. If you are not feeling well, please don’t go out, don’t go to work. Make sure that if you have symptoms, please go and get tested.”

Elliott also added that the second wave will be more “complicated and more difficult to deal with than the first wave” as the flu season is approaching too.

On top of that, the province faces a reduced capacity in the hospitals because of the number of seniors from long term care homes moving into the hospitals due to the pandemic.

Besides that, the hospitals still have to deal with the thousands of postponed surgeries caused by the first wave, Elliot said.

But she said the government has also already taken those factors into consideration, and formed a comprehensive plan that will soon be announced.

On Sunday, President and CEO of Ontario Hospital Association Anthony Dale released a statement urging Ontarians not to be misled by the lower cases counts prior to the current surge, and the economy reopening.

“If current trends continue to accelerate, economic restrictions may tighten once more, and the school year for our children will be in jeopardy.”

Lecce added that the province has invested $200 million to hire more educators in response to spreading out the classes, reducing class sizes, and providing parents the choice of letting their children attend online or in-person classes.

Ford said that most Ontarians are following the COVID-19 safety protocols, but warned a small number of people are “getting lax.” He said social gatherings are the main cause of the upsurge.

“It’s not the bars per se or the restaurants, it’s social gatherings,” Ford said.

“So folks, I’m begging you please, just cut out of the social gatherings, it’s just not worth it because this COVID-19 is ramping up again.”

In Quebec, the premier Francois Legault announced last Thursday starting Sept. 12, Quebecers “who refused to wear a mask without reason where it’s mandatory will receive fines.”

“A large majority of people are following Public Health instructions, but, beside the large majority who act responsibly, there’s a minority of irresponsible people,” Legault added.

“We cannot accept that a few irresponsible people put all Québec at risk. It’s time to penalize them.”

When asked about the amount of the fines, Legault replied, “They’ll be more than $50.”