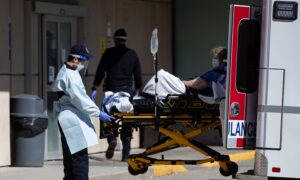 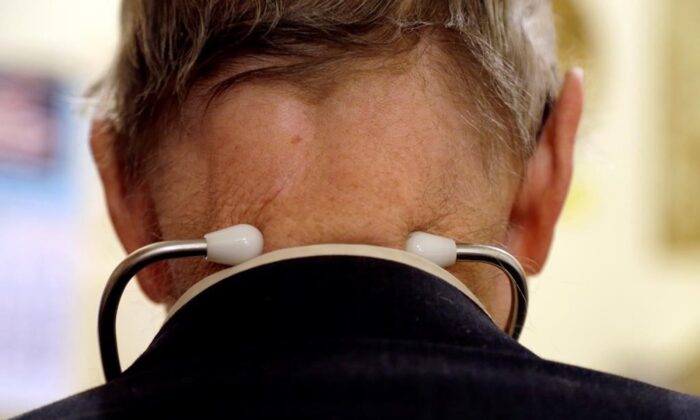 A doctor wears a stethoscope around his neck as he tends to patients in his office in Illinois on Tuesday, Oct. 30, 2012. The Ontario Medical Association says nearly half of all primary care clinics in the province are considering closing their doors because they can't pay their expenses.. Jeff Roberson/The Canadian Press.
AMERICA

Ontario Could Be Headed for a Primary Care Crisis, Says Medical Association

OTTAWA—Nearly half the primary-care clinics in Ontario are at risk of closing their doors if the provincial government can’t immediately pay doctors for virtual visits, according to a survey by the Ontario Medical Association.

Most clinics have been serving patients through virtual appointments, such as over the phone, whenever possible to try to limit potential exposures to COVID-19.

The Ontario government created new billing codes last month to allow doctors to be paid for those appointments.

But the medical association said its members recently discovered the government’s computer system wouldn’t be updated to accommodate the new codes until June or July, though the government now expects payments to be made in early May.

“We co-operated with the government to make those codes,” said OMA president Dr. Sohail Gandhi.

Without the income from those appointments, “there’s no income, there’s no ability to pay for a receptionist, or a nurse or rent,” he said.

The association fears the province could be heading for a primary-care crisis if the government doesn’t do something soon.

Many doctors have also been hit financially because elective and non-urgent procedures have been cancelled, to protect patients and leave room for hospitals to focus on a potential influx of COVID-19 cases.

The OMA surveyed 4,830 members across the province, and 49 percent said they will be forced to close their clinics if something doesn’t change.

Of those, 70 percent said they expected those closures to last at least three months.

Ontario Health Minister Christine Elliott acknowledged the problem and said she’s in discussions with the OMA to find a solution.

“We know that there’s a problem right now with them getting paid for the virtual visits, that’s part of the way our system is,” Elliot said at a briefing Friday.

“We are looking for a solution that is going to work for doctors in Ontario and we hope to have that solution available very soon.”

Gandhi said he worries about what happens once the first wave of COVID-19 passes, if a big chunk of health-care system isn’t there.

“I feel betrayed and completely devalued,” respirologist Dr. Neil Maharaj wrote on the OMA’s website. He effectively shut down his clinic and offered virtual visits to patients in an effort to stop the spread of the novel coronavirus.

“They’ve turned their backs on doctors, plain and simple. We are expected to take unreasonable personal risks while simultaneously fund the health-care costs for this pandemic.”

Half of doctors surveyed said they have already had to reduce staff as a result of the sudden lack of income, including immunologist and allergist Dr. Zainab Abdurrahman.

“Like many others we are scrambling trying to find ways to be able to pay our rent, as it is likely we do not have any income coming in next month,” said Abdurrahman.

“At the end of this pandemic we need to still have offices to see patients and provide care but how can I do this without support from my provincial government?”

Not all clinics are affected by the new billing codes: Those whose doctors are paid by the procedure or visit are suffering most, Gandhi said. But other clinics are paid according to the number of patients registered with their practices.

In a statement, a spokesperson for the Ontario Ministry of Health said there’s been a considerable uptake in the new billing codes, demonstrating a clear need for the virtual telehealth appointments.

“We encourage doctors to continue using these new codes as they support the ongoing fight against COVID-19,” ministry spokesperson Hayley Chazan wrote.