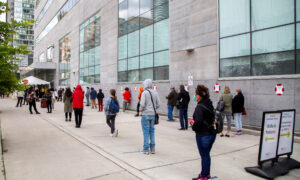 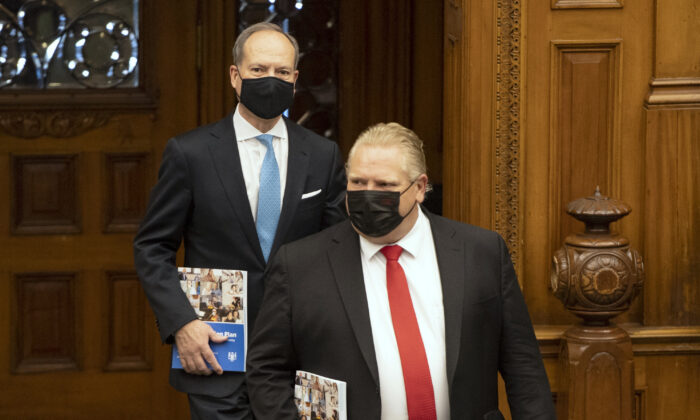 Ontario pledged to boost the economy, take measures to defeat COVID‑19 and fix long-term care, and support families in the 2021 budget unveiled Wednesday, the second budget the Ford government has delivered since the pandemic.

These and other promises in the budget will be achieved with a $173 billion spending plan, resulting in a projected deficit of $33.1 billion in 2021–22.

Finance Minister Peter Bethlenfalvy said that while “this level of the deficit is neither sustainable nor desirable forever,” he is convinced the “record investments” contained in budget are necessary for the health of the Ontarians and the economy amid the pandemic.

“You can’t have a healthy economy without healthy people,” Bethlenfalvy said in a statement on March 24. “When this chapter is finally closed, I’m confident that the people of Ontario are going to unleash the economic growth that is necessary for job creation, prosperity, and a stronger province.”

Over $1 billion will be spent on provincewide vaccination, $1.4 billion on securing personal protective equipment, masks and gloves, and an additional $2.3 billion for testing and contract tracing in the fight against COVID-19.

In other health funding, $1.8 billion will go toward providing care to COVID-19 patients and $650 million to protect residents in long-term care (LTC) homes.

Another $4.9 billion will be spent over the next four years to increase the daily hours of direct care to four for residents in LTC homes, and hire more than 27,000 personal support workers and nurses to fill up the shortage in health-care staff in these settings, according to the budget. The plan was first introduced in November 2020 but the costs weren’t detailed.

The budget is also welcomed by Donna Duncan, CEO of Ontario Long Term Care Association, who said long-term care spending around staffing and expansion of available beds “will make a meaningful difference in the lives of Ontario’s seniors now and in the future.”

In terms of family support, the budget includes a third round of payments to families with children through the Ontario COVID-19 Child Benefit. The payment will double to $400 per child and $500 for each child with special needs.

For people seeking retraining due to job loss because of the pandemic, $260 million will be set aside to provide up to $2,000 per individual to pay for half of their eligible training expenses under the new Ontario Jobs Training Tax Credit program, introduced in the budget.

For small businesses, the Ford government said it will provide a second round of grants ranging from $10,000 to $20,000 to those affected by the provincewide shutdown. The program was launched in January, and the second round will incur another 1.7 billion in costs, totalling the amount to $3.4 billion in order to help about 120,000 small businesses.

The Canadian Federation of Independent Business applauded the government’s move to double the grant funding, but said some amendments are still needed.

“How much interest will Ontarians pay on their government’s growing debt?” the institute asked on Twitter after the budget was announced.

How much interest will Ontarians pay on their government's growing debt? https://t.co/d8uesjl7r8 #onpoli

“All of these large deficits mean substantially more debt will be added to the government’s books,” the Fraser Institute said in a blog on its website.

“According to budget forecasts, provincial net debt in 2023/24 will reach $503.1 billion. Ontario’s debt-to-GDP ratio (a good measure of debt sustainability) will reach the highest level in provincial history at 50.2 percent if the current plan comes to fruition.”

The growing debt interest payments mean it’s more difficult for Ontario to reduce the deficit and return to budget balance in the near future, it said.