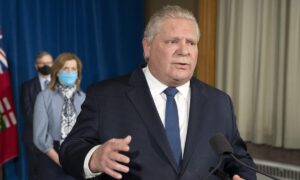 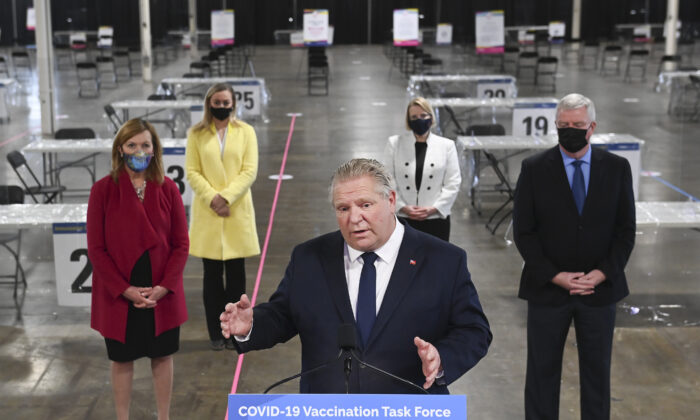 Ontario Premier Doug Ford announced Thursday that the entire province will be under an “emergency shutdown” for at least four weeks starting Saturday due to surging COVID-19 cases.

“We are facing a serious situation and drastic measures are required to contain the rapid spread of the virus, especially the new variants of concern,” Ford said.

“I know pulling the emergency brake will be difficult on many people across the province, but we must try and prevent more people from getting infected and overwhelming our hospitals.”

The government says COVID-19 related ICU admissions are projected to exceed 650 beds in a few weeks, with the increases driven by COVID-19 variants.

“Our vaccine rollout is steadily increasing, and I encourage everyone who is eligible to get vaccinated. That is our best protection against this deadly virus,” Ford said.

The shutdown means restaurants provincewide are prohibited from offering indoor as well as outdoor dining. Only takeout, drive-through, and delivery services are allowed.

Essential stores such as pharmacies, supermarkets, convenience stores, and stores that mainly sell groceries will continue to remain open at 50 percent capacity.

Stores such as big box retailers and liquor stores can operate at 25 percent capacity.

Gyms, however, must cease operations under the shutdown order. Personal care services such as barbershops and hair and nail salons, which were set to reopen on April 12 in grey zone regions, can no longer open as planned.

The shutdown measure also restricts residents from gathering with anyone outside their household. Outside gatherings will be limited to five people as long as they maintain two metres of physical distance from each other.

Funerals, weddings, and religious services will be capped at 15 percent capacity indoors.

The province reported 2,333 new cases of COVID-19 Wednesday and 15 more deaths linked to the virus. It also had a new high of 421 COVID-19 admissions in intensive care units.