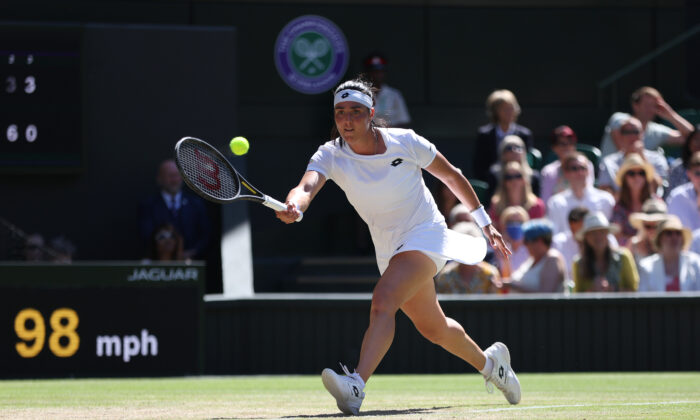 Ons Jabeur of Tunisia plays a forehand against Tatjana Maria of Germany during their Women's Singles Semifinal match on day eleven of The Championships Wimbledon 2022 at All England Lawn Tennis and Croquet Club in London on July 7, 2022. (Clive Brunskill/Getty Images)
Tennis

There will be a first-time ladies champion at Wimbledon.

Third-seeded Ons Jabeur of Tunisia and No. 17 Elena Rybakina of Kazakhstan won their matches in Thursday’s semifinals to advance to Saturday’s final at the All England Club in London.

Rybakina easily dispatched No. 16 Simona Halep 6–3, 6–3 in the second. Halep, of Romania, had won 12 straight matches and 21 consecutive sets at Wimbledon dating back to her journey to the 2019 championship.

Jabeur finished with four aces and 39 winners against 30 unforced errors to take down her good friend, Maria.

Jabeur reached her first Grand Slam final and also becomes the first Arab or North African player—male or female—to reach the finals of a major event.

“It is a dream coming true from years and years of work and sacrifice. I am really happy it is paying off and I continue for one more match now,” Jabeur said. “I am a proud Tunisian woman standing here today. I try to inspire as much as I can. It is not just Tunisia. I want to see more and more Arab-African players on the tour. I just love the game.”

Jabeur guided Maria onto the court in the aftermath of her win to ensure Maria received adulation from the fans. Maria is a 34-year-old mother of two whose incredible fortnight came to an end.

“I definitely wanted to share the moment with her at the net,” Jabeur said. “She is such an inspiration for so many players, including me, coming back after two babies. I still don’t know how she did it.”

The 23-year-old needed just one hour and 15 minutes to hand Halep her first loss at Wimbledon since 2018. Halep suffered nine double faults, two that came on break points.

“It was a great match and Simona, she’s a great champion,” Rybakina said. “I was really focused today and I’m really happy with my performance. I think I played really solid today.”

Rybakina said she was nervous, but it certainly didn’t show.

“I was nervous, of course, but I think the matches before helped,” Rybakina said.

Rybakina seeks her third career singles title, but she hasn’t won in 2.5 years.