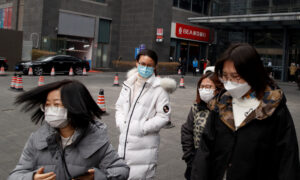 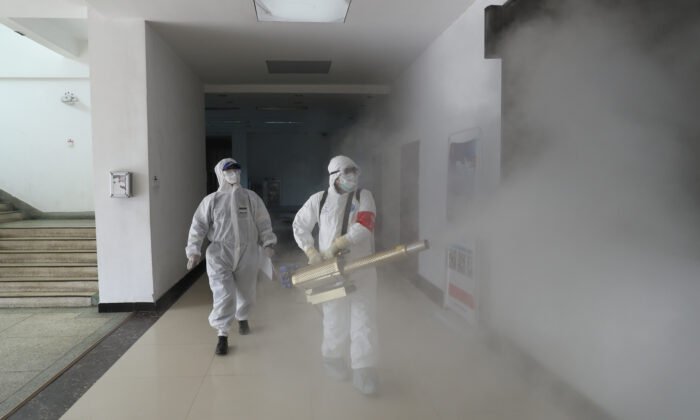 Volunteers in protective suits disinfect a residential compound in Wuhan, the epicenter of the Novel Coronavirus outbreak, in Hubei Province in China on Feb. 22, 2020. (China Daily via Reuters)
PUBLIC HEALTH INFORMATION

Only One Drug Might Help Treat Coronavirus Symptoms: Health Expert

Only one drug, developed by U.S.-based Gilead Sciences, has shown potential in treating symptoms of the new coronavirus, a World Health Organization (WHO) expert said on Monday.

“There is only one drug right now that we think may have real efficacy and that’s remdesivir,” Dr. Bruce Aylward, an expert from Canada who is leading a team in China trying to find questions to lingering mysteries surrounding the new virus, told reporters in Beijing.

Chinese authorities said the biggest challenge in completing clinical trials was a decline in infected patients, Aylward said, relying on official figures from the Chinese Communist Party that are widely questioned.

Another challenge is the diversion of resources into studying potential treatments that “are less promising,” Aylward said. “We have got to start prioritizing enrollment into those things that may save lives and save them faster.”

Two clinical trials on coronavirus patients are taking place in China under the watch of WHO. One is testing remdesivir.

Preliminary results from both trials are expected within weeks, WHO officials said on Feb. 20.

A Gilead spokesman told The Epoch Times in an email that the company is expecting results from the two trials in April.

In a statement on Jan. 31, Gilead Sciences Chief Medical Officer Merdad Parsey said that remdesivir isn’t licensed or approved for use anywhere in the world and “has not been demonstrated to be safe or effective for any use.” But requests from authorities prompted the company to provide remdesivir for use in a small number of patients.

Apart from working with health authorities in China, Gilead is also expediting appropriate laboratory testing of remdesivir against samples of the new virus.

Remdesivir has demonstrated in vitro and in vivo activity in animal models against the viral pathogens MERS and SARS, two coronaviruses that preceded the COVID-19 virus, Parsey said. The U.S. National Institutes of Health said earlier this month that remdesivir prevented MERS in monkeys.

Researcher’s from the agency’s National Institute of Allergy and Infectious Diseases said the study’s promising results supported additional clinical trials of the drug for both MERS and COVID-19.

The other clinical trial underway in China that was being carried out through fast-tracking by WHO is testing the efficacy of lopinavir and ritonavir, two drugs typically used to treat HIV, or human immunodeficiency virus infection.

The WHO team in China, which includes Aylward, was in Wuhan over the weekend for the first time. The virus emerged there in December 2019 before infecting tens of thousands across the country and spreading to dozens of other nations.

Aylward spoke at a joint press conference with Chinese officials that aired on state television. He wore a blue breathing mask that covered his mouth and nose.

Aylward said Chinese interventions helped prevent the spread of the virus but said his aim wasn’t to praise the country’s authorities but to warn other countries as his team released a report making 22 recommendations to China and other nations. There are benefits from extreme measures taken to try to contain the virus, he said, highlighting actions taken by Italy this week as the virus infected hundreds in the Lombardy region, killing at least six in northern Italy.

The virus may be around in China “for months,” Aylward later told reporters, adding that authorities are still working “to get Wuhan under control and clean out other areas.”

Later Monday, WHO officials declined to call the situation with the virus a pandemic, arguing that there hasn’t been “the uncontained global spread of this coronavirus” or “large-scale severe disease or death.”

There are multiple epidemics raging, officials acknowledged, as case counts in Italy, South Korea, and Iran continued rising sharply at the beginning of the workweek.