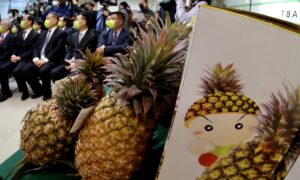 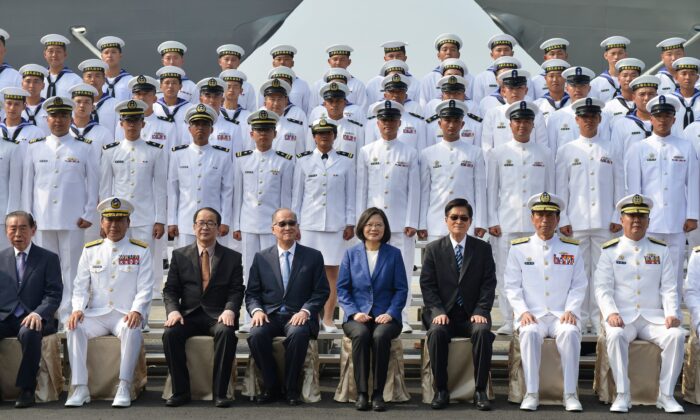 Taiwan's President Tsai Ing-Wen (C in blue jacket) and assembled naval personnel take part in a ceremony to commission two Perry-class guided missile frigates from the US into the Taiwan Navy, in the southern port of Kaohsiung on Nov. 8, 2018. President Tsai Ing-wen vowed on Nov. 8 that Taiwan would not "concede one step" in defending itself as she inaugurated two frigates bought from the US aimed at boosting the island's naval capabilities against China threats. (Chris Stowers/AFP/Getty Images)
Chinese Regime

Only by Resisting the CCP Can Taiwan Be Strong: Analyst

A Taiwanese professor has told the Chinese-language Epoch Times in an exclusive interview that only by adamantly opposing the Chinese Communist Party (CCP) can Taiwan be strong.

His comments come following Taiwan President Tsai Ing-Wen’s recent warning that Taiwan will be reduced to another Hong Kong if it chooses to appease the CCP.

Tsai, who is also Taiwan’s Democratic Progressive Party (DPP) chairwoman, spoke at a local party meeting in Taipei on March 16, saying: “Taiwan faces tremendous external pressure. We’ve been targeted by China over and over again. Taiwan’s confidence to stand up to China has almost worn away.

But she warned, “If we choose to please China, Taiwan will be turned into a second Hong Kong for sure.”

Yen Chien-Fa, a former chairman of the DPP’s China Affairs Committee and professor of business administration at Chien Hsin University of Science and Technology, said that in order to hold onto its democratic system of governance, Taiwan needs to stand united against Beijing’s influence, or else fall like Hong Kong, where the Chinese Communist Party from Beijing have taken over as arbiter, even after many residents fought back with the 2014 umbrella movement, the 2019 protests against an overhaul of extradition law, and the 2020 Hong Kong national security law.

“Legally and internationally, Hong Kong is recognized as part of communist China,” Yen said, referring to the 1997 handover of Hong Kong from the UK back to China, deemed a political legacy of late Chinese leader Deng Xiaoping.

Yen noted that the election of Hong Kong’s legislature is being delayed until September 2022 as Beijing attempts to ensure that only CCP “patriots” be elected to new seats to solidify its control. With the intervention of the CCP’s National Congress and a local political advisory body, members of Hong Kong’s Legislative Council will introduce electoral reforms to increase the number of seats in the council from 70 to 90, which will see the pro-democracy opposition to lose its one-third right to resist.

According to Song Ru’an, deputy commissioner of the Office of the Commissioner at the CCP’s Ministry of Foreign Affairs in Hong Kong, the term “patriot” refers to those who “show their allegiance to the CCP-led People’s Republic of China rather than a cultural and historical China.”

Yen said that Song told reporters on March 9 that, “The CCP’s branches in Hong Kong continue to purge local democrats. On Feb. 28, 47 pro-democracy activists were charged with ‘subversion.’ Therefore, the democracy camp is breaking down. Now, the CCP is turning to target local pro-CCP establishment members.”

Yen noted that Beijing’s destabilization of the city’s democratic system unmistakably indicates that Chinese leader Xi Jinping is turning increasingly turning left—going back to the path of late communist Chinese leader Mao Zedong, who led China into a Cultural Revolution in the 1960s and 1970s.

“Taiwan should regard the CCP-infiltrated Hong Kong as a minefield to avoid,” he added.

Yen says Taiwan is a de facto sovereign country and is called the Republic of China under its Constitution. He also says it is a historical fact that the island never belonged to communist China and vice versa.

He told The Epoch Times that Taiwan can never accept the CCP’s policies of “One China” and “the 1992 Consensus,” or else, the issue of Taiwan’s independence will be considered “a country’s internal affair,” and the United States and Japan would find themselves morally and legally powerless to step in and save Taiwan if the CCP pulls the trigger on its missiles aimed at Taiwan.

CCP’s Winning Tactic: Unite with Secondary Enemy to Defeat a Primary One

Yen explained that the founders of Taiwan’s Kuomintang party (KMT) were familiar with the CCP’s pattern of fighting against competitors from its decades of struggle against the communists.

In 1978, the Republic of China President Chiang Ching-kuo published his “Three No’s” policy—no contact, no compromise, and no negotiation—for dealing with the CCP. He told the New York Times: ”To talk peace with the Chinese Communists is to invite death. This is an agonizing, blood-stained lesson that we and many other Asian countries have learned.”

In October 1987, Chiang said in an exclusive interview with The Wall Street Journal Asia: “When it comes to the CCP’s slogan ‘One Country, Two Systems,’ it’s another form of deception under the banner of its United Front Work, which doesn’t work at all.”

In Yen’s opinion, KMT members who today favor “One China” and “the 1992 Consensus” are traitors to the late Republic of China president Chiang Ching-kuo. They are turning a blind eye to both their party’s past and Hong Kong’s present, and have shifted their enemy from the CCP to the DPP.

Yen said this has been the CCP’s tactic to “unite with a secondary opponent to attack a primary one.”

According to Yen, currently the DPP is deemed by the CCP to be the primary enemy, and the KMT is the one it will join hands with to battle against the DPP. Later, when it is the KMT’s turn to rule Taiwan, the CCP will target the KMT and drive it out of power too.

The CCP will for sure repeat this tactic, as it is already doing in Hong Kong, he said.