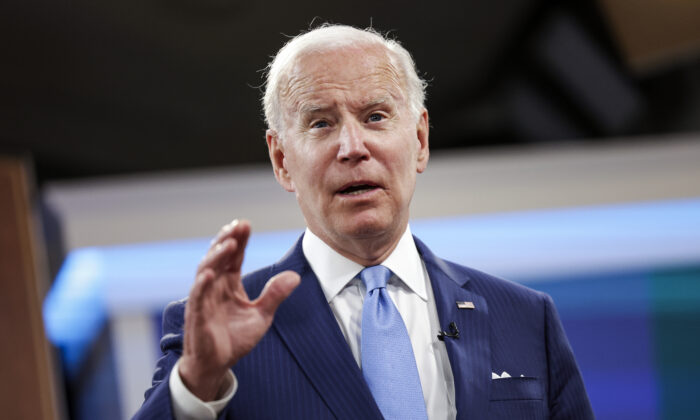 Only 28 Percent of Americans Approve of Biden’s Handling of Inflation: Poll

Just over a quarter of American voters say they are content with President Joe Biden’s handling of inflation, a new poll shows.

According to an ABCNews/Ipsos poll released on June 5, 28 percent of voters said they were pleased with how Biden is dealing with inflation, while 27 percent gave the same answer about rising gasoline prices.

Thirty-seven percent said they approved of the president’s efforts to facilitate an economic recovery following the COVID-19 downturn. That’s a decline of 16 percentage points from about a year ago.

The percentage of people satisfied with Biden’s overall performance ticked up slightly to 42 percent from 36 percent in late May, the lowest approval rating since taking office.

The poll figures also indicate that economic factors would play a decisive role in the midterm elections in November.

The poll was conducted June 3–4 and is based on a nationally representative sample of 542 adults.

The survey follows Biden’s remarks that it’s unlikely his administration would be able to cut the cost of inflation, including gas and food prices, anytime soon.

“We can’t take immediate action that I’m aware of yet to figure out how we’re bringing down the prices of gasoline back to $3 a gallon,” he added.

Biden cited the war in Ukraine, which has blocked that country’s wheat exports, as an external cause of inflation.

In a May 30 op-ed on The Wall Street Journal, Biden laid out three steps in his plan for fighting inflation.

U.S. inflation hit 8.3 percent in April, near a 40-year high, as prices of food and gasoline continue to surge.

The national average gas price reached a record on May 17 at $4.67 a gallon, which is 45 cents higher than the price a month earlier, and $1.58 more than a year ago, according to AAA.