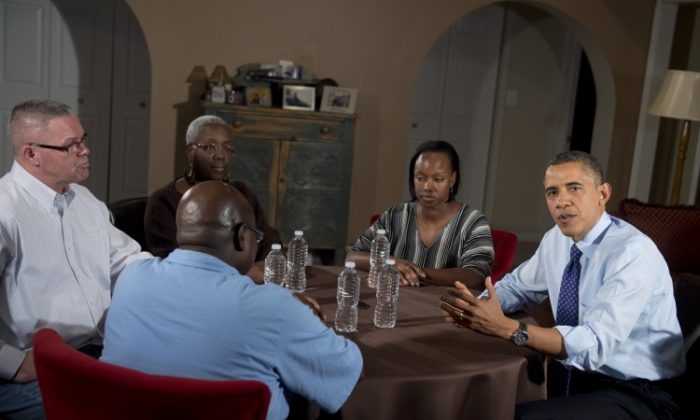 President Barack Obama (R) speaks about the fiscal cliff with Tiffany Santana (2nd R), Richard Santana (L), Velma Massenburg (2nd L), and Jimmie Massenburg (C) at their home in Falls Church, Va., on Dec. 6, 2012, after Tiffany Santana contacted Obama about how a tax increase would affect her family. The primary fear about the fiscal cliff is that the automatic spending cuts and tax hikes could trigger a second recession and cost jobs. (Saul Loeb/AFP/Getty Images)
US

Dec. 7 marks only 25 negotiating days remaining until the fiscal cliff. If lawmakers do not work out a compromise they can live with by Dec. 31, the Bush tax cuts, which were set to be temporary, will expire, and automatic across-the-board spending cuts will begin.

The tax increases and spending cuts would total $607 billion.

Legislators set this scenario up, and they can dismantle it. They set an artificial deadline when they were unable to agree on a way to reduce the federal deficit. They still appear to be deadlocked.

It is not just gamesmanship. Republicans and Democrats have genuinely different ideas about the role of government and about the best medicine for the still ailing economy.

According to Catherine Bonser-Neal, associate professor of finance at the Kelley School of Business Indianapolis at Indiana University (IU), it is important to deal with the deficit, but the way in which it is dealt with has both long- and short-term impacts on the economy.

“The balancing act being examined by members of Congress is how to minimize the short-term economic-growth impacts of a cut in the budget deficit against the longer-term need to reduce the level of U.S. debt as a share of the economy,” Bonser-Neal said, according an IU news release.

“However, history and economic research suggest that a preference to avoid short-term pain should not be put ahead of the need to address the country’s long-term debt problem,” she added.

If a country’s debt exceeds a certain proportion of its income, resources have to be diverted to servicing the debt, paying interest on it, and paying it back.

The resources that are devoted to the debt are no longer available for investment, and real economic damage is done, according to Bonser-Neal. A country could become insolvent with too high a ratio of debt to income.

She said that economists do not agree on exactly how badly deficit-reduction efforts will slow the economy.

Democrats and President Barack Obama want to address the deficit by raising revenue, doing so by allowing the Bush tax cuts to expire only for those who make over $250,000 per year. Obama advocates stimulating the economy with government domestic spending.

Republicans and Speaker of the House John Boehner advocate renewing the Bush tax cuts for people of all income levels, and sharply reducing government domestic spending.

The primary fear about the fiscal cliff, and one of the reasons it was given such a dire nickname, is that the automatic spending cuts and tax hikes could trigger a second recession and cost jobs.

“The answer is not a simple one and ultimately depends on how consumers, investors, and businesses respond to a change in tax rates and to the changes in government programs. However, whatever the short-term impact, policy must be made with long-term consequences in mind,” said Bonser-Neal.

The Obama administration is using its 21st-century campaign apparatus to seek support for its policies. The president held a Twitter #My2k live question-and-answer session in the White House on Dec. 3.

The session’s name refers to the estimated $2,000 more a middle-income taxpayer would owe should the tax cuts expire.

Questions asked during the session reflected the partisan divide.

Phillip M. McKenzie asked for assurance that negotiations will not include entitlement reform that will “hurt the most needy.” Obama tweeted back, “we can reduce deficit in balanced way by ending tax cuts for top 2% + reforms that strengthen safety net & invest in future.”

Boehner released a statement on Dec. 5 in which he blamed the president for the stalemate. “The president talks about a balanced approach, but he’s rejected spending cuts that he has supported previously and refuses to identify serious spending cuts he is willing to make today.”

He deemed the president responsible for “preventing us from reaching an agreement,” adding, “With the American economy on the brink of the fiscal cliff, we don’t have time for the president to continue shifting the goal posts.”

Eric Leeper, Rudy Professor of Economics in the College of Arts and Sciences at IU–Bloomington, said in the IU news release, “Perhaps most disturbing about the cliff fiasco is what it portends for how our officials will cope with the fiscal abyss that awaits us,” when Social Security and Medicare advance and consume more of the gross domestic product.

Adjustments made now could prevent more painful adjustments in the future, yet the lack of cooperation between parties has prevented any adjustments so far.

Steve Russell, professor of economics in the School of Liberal Arts at Indiana University-Purdue University Indianapolis (IUPUI), said in the release that it is important to remember that the cliff is an artificial one.

“From the debate on the subject, you might get the idea that the federal government faces a fundamental budget crisis after the first of the year: that it may default on its debt, or run out of funds to finance its spending, or something of that sort,” Russell stated.

He continued, “Nothing could be further from the truth. The government does have long-run budget problems, but we have plenty of time to face them, if we act wisely.”