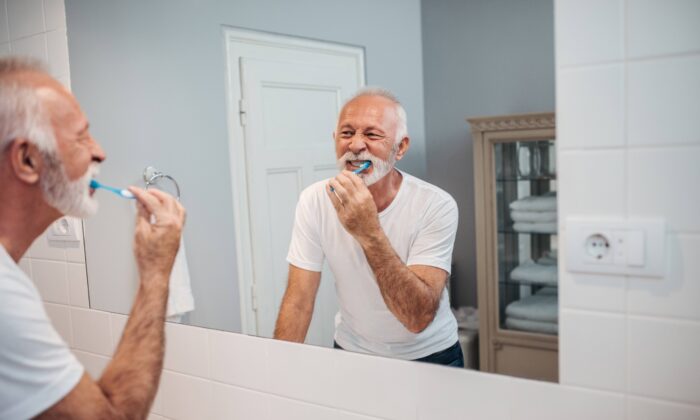 Good dental hygiene can prevent bacteria in our mouth from triggering an immune response that has dangerous potential consequences. (bbernard/Shutterstock)
Australia

According to ADA’s survey on a sample of 25,000 Australian adults, only “1 in 3 adults whitening their teeth and the supervision of a dental professional.”

Whilst teeth whitening has increased to 22 percent in respondents–an 8 percent increase since the ADA started tracking this data, professional treatments have become a “downward trend.”

ADA stated that for those that get professional whitening treatments, only 14 percent opt for in-clinic whitening whilst the majority, 19 percent use take-home kits.

Whitening products contain peroxides, often in the form of hydrogen peroxide or carbamide peroxide. It is in bleach and is used to dissolve stains of the teeth, but in high concentrations, it can be corrosive to the eyes, skin and respiratory system.

Though only dentists are allowed to use products containing more than 6 percent hydrogen peroxide and over 18 percent of carbamide peroxide, Levi warned that the concentration of some online and off-the-shelf products can go “illegally” high.

By not getting teeth whitening professionally done, consumers are exposing themselves to risks of a range of injuries such as soft tissue burns, tooth sensitivity, discoloured tooth, extreme pains if the bleach gets into a crack or a hole, damaged enamel and possibly even bleach ingestion.

Prof. Laurie Walsh from the University of Queensland’s School of Dentistry has previously claimed that more than 2.5 million Australians’ smiles could be ruining their smiles by whitening their tooth as some fillings and stains cannot be bleached with chemicals in over-the-counter treatments.

“People need to get their oral health assessed first to ensure there are no cracks in teeth, untreated dental decay, leaking fillings or other unresolved dental issues that could cause pain, discomfort, damaged nerve pulp-or even more serious problems down the track,” Levi said.

The ADA also warned against products labelled as “all-natural” stating that some products have been found containing sodium chlorite, an industrial cleaning chemical in swimming pools.

“It’s a bit of a wild west,” Levi concluded.

“The safest option recommended by the ADA is to see a dentist to assess your mouth first, to see if it is suitable for whitening and for any problems to be fixed. Then you can decide with your dentist on a course of action to ensure you get the best outcome.”

The ADA said that it has held “serious concerns” about the unregulated space of teeth whitening and had written to the ACCC previously on several occasions about the ease of availability of products that have no safety warnings despite the dangerously high concentrations of peroxide.

The ACCC in 2011 notified all known suppliers of DIY teeth whitening kits “that products containing concentrations of more than 6 per cent hydrogen peroxide or more than 18 per cent carbamide peroxide are unsafe and should not be supplied to consumers” though unqualified clinics providing whitening treatments have not been implicated.

The AAP contributed to this report.