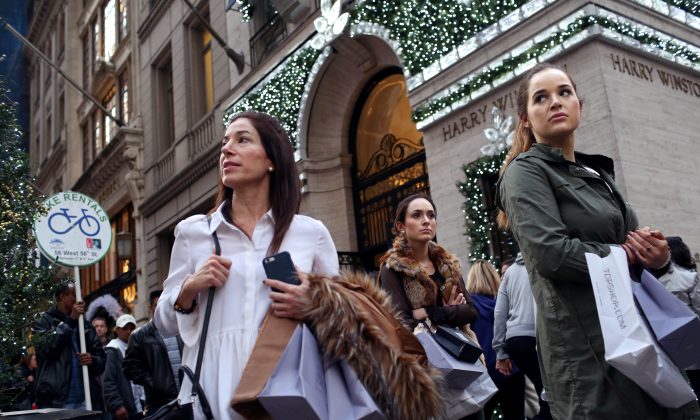 In-store spending on Thanksgiving and Black Friday fell 10 percent from last year, according to data from ShopperTrak. Black Friday sales were down by more than $1 billion, from $11.6 billion in 2014 to $10.4 billion this year.

Some major retailers also received a boost from an unexpected source—China.

No, not from the thousands of Chinese tourists meandering through Macy’s Herald Square flagship store. Many U.S. retailers are establishing an online presence in China, selling and shipping American goods directly to Chinese online shoppers.

Around 60 percent of Chinese consumers shop online, compared to just over 30 percent in 2009, according to the most recent data from Statista. A recent Nielsen study found that Chinese online shoppers are willing to spend significantly more on cross-border purchases than domestically, especially “affluent and well-educated young people.”

Some companies listed directly on Chinese websites. Over the summer, Macy’s became the first U.S. department store to set up an online storefront on Tmall, Alibaba’s popular online shopping website.

Online shopping traditionally has been a self-contained affair due to customs, currency complexities, tariffs, and expensive and slow shipping. But according to a recent survey by Alibaba’s Taobao that has studied Chinese online shopping trends since 2005, the number of countries and regions with online shops selling goods directly to China has increased drastically over the last 10 years.

The electronic border between China and the rest of the world has been blurring in recent years through international partnerships. Both Alibaba and JD.com built global platforms allowing foreign online shops to ship to consumers in China, while the Chinese government has set up certain warehouse zones in Shanghai, Hangzhou, and Guangzhou for faster processing and lower taxes.

Top categories of goods shipping to China include cosmetics and skin care products. In recent years, niche and hard-to-find products such as local food specialties and wines have also been popular.

The biggest impetus for Chinese shoppers ordering goods abroad is concerns about quality and counterfeit products from domestic vendors. A recent official Chinese survey found that almost 40 percent of products sold online in China were either counterfeit or of subpar quality.

Alibaba itself faced lawsuits from luxury goods companies that said its platforms condone sales of counterfeit goods, though in recent years the company said it stepped up the policing of such misbehavior. This is also a major driver for affluent Chinese shoppers moving from Alibaba’s Taobao—which sells goods from smaller retailers—to Tmall, which hosts online storefronts set up by brands directly.

Consulting firm McKinsey’s September 2015 E-Commerce Sentiment Survey sought to study the attitudes of 1,200 Chinese consumers in the aftermath of the summer stock market correction that saw many Chinese stocks lose a third of their value. They were asked how they feel about the economy and how their purchasing decisions might be affected by stock market gyrations.

“For some segments of Chinese consumers, the recent economic turmoil appears to have had little impact,” McKinsey said.

“Heavy online shoppers, people in their 30s, and consumers living in Tier-1 cities are among the most optimistic: approximately 10 percent more consumers in these groups said they are confident about where the economy is heading and appear less jittery about the prospect of an economic slowdown in the immediate future.”

Alibaba said it sold products worth more than 91 billion yuan ($14 billion) on Nov. 11, China’s “Cyber Monday” festival, its busiest online shopping day of the year. While Alibaba’s 2015 sales on the day were 50 percent higher than last year, heavier discounts and promotions were in place this year.