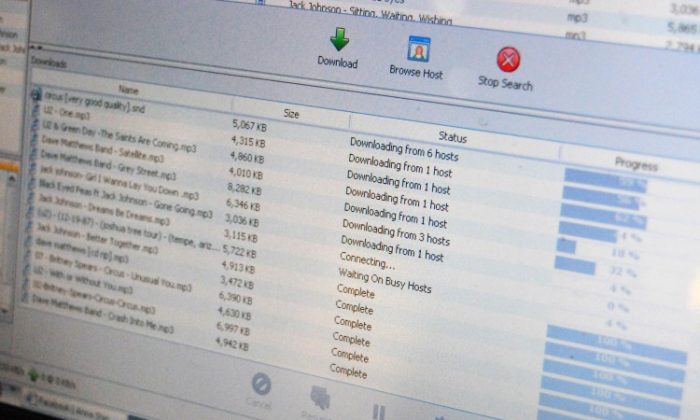 A picture taken on March 10, 2009 in shows the screen of a computer showing a web site of downloading contents. (Caroline Ventezou/AFP/Getty Images)
US

Despite its initial bipartisan support, the Stop Online Piracy Act (SOPA) introduced by Republican Rep. Lamar Smith of Texas appeared to put supporters on the defensive in a House Judiciary Committee hearing this week after the proposal stirred a technology sector backlash—including accusations of government censorship.

It’s “beyond troubling to hear hyperbolic charges that this bill will open the floodgates to government censorship,” North Carolina Democrat Rep. Mel Watt, a co-sponsor of SOPA (H.R. 3261), said at the Nov. 16 hearing.

The bill proposes to “promote prosperity, creativity, entrepreneurship, and innovation by combating the theft of U.S. property, and for other purposes,” and has received strong support from the movie and music industry.

At issue for such industries is the availability of pirated material on foreign, rogue websites, which violate copyright laws, providing free access and downloads to visitors. This is where SOAP comes in.

The Motion Picture Association of America (MPAA) website has a prominent space on it’s homepage dedicated to how the piracy issue has negatively impacted their industry. According to the association, the legislation proposed is “bicameral, bipartisan, and would protect hundreds of thousands of American jobs, billions in taxes and economic output, and health and public safety of all Americans.”

“Rogue sites legislation targets foreign rogue sites. It goes after sites that are dedicated to pirating copyrighted works and peddling counterfeit goods,” said MPAA blogger Paul Hortenstine Nov. 15, in a posting titled, “Legislation and the DMCA. “Legally operating sites will continue to have the same protections they have under DMCA.”

The DMCA, or Digital Millennium Copyright Act, is an existing copyright law enacted in 1998, and provides protection for legitimate sites that remove copyrighted materials after receiving notification of infringement.

Maintaining DMCA’s safe harbor approach for legitimate sites is at the heart of opposition to SOPA. The opposition comes from tech companies, who feel that the bill’s vagueness would leave those companies in the industry to face “uncertain liabilities,” according to a letter submitted to the committee earlier this week by technology giants AOL, eBay, Facebook, Google, LinkedIn, Mozilla, Twitter, Yahoo, and Zynga Games.

“We support the bills’ stated goals—providing initial enforcement tools to combat foreign ‘rogue’ websites that are dedicated to copyright infringement or counterfeiting,” the group said in the letter. “Unfortunately, the bills as drafted would expose law-abiding U.S. Internet and technology companies to new uncertain liabilities, private rights of action, and technology mandates that would require monitoring of websites.”

The letter stresses that the bill would harm an industry that represents more than 3.4 percent of GDP in the United States. “We are concerned that these measures pose a serious risk to our industry’s continued track record of innovation and job creation, as well as to our nation’s cybersecurity,” the letter stated.

Also opposed to the proposed legislation is the Consumer Electronics Association (CEA). Gary Shapiro, president of the association said, “I’ve always said that the balance among IP (Intellectual Property) protection, freedom of speech, and online innovation is a delicate one with no easy solutions.

“If the content community is truly committed to addressing illegal commercial counterfeiting without harming the broadband technologies that are driving our economy forward, we can and should have a dialogue about changes to S.968 (PROTECT IP Act) and H.R. 3261 that attack the parasite without killing the host,” Shapiro concluded.

The U.S. Chamber of Congress is supporting the legislation. “Websites that blatantly steal the creativity and innovation of American industries violate a fundamental right to property,” said Thomas J. Donohue, president and CEO of the U.S. Chamber. “Operators of rogue sites threaten American jobs, endanger consumer safety, and undermine the vitality of the online marketplace.

“I commend Representatives Smith, Goodlatte, Conyers, and Watt for standing up to the mass theft of American intellectual property,” Donahue said. The chamber, known for its lobbying power in Washington, has faced criticism over SOPA from tech agencies that are among its members.

The legislation will need changes to garner support from both sides of the issue, but there is mutual recognition of a need to do something about rogue sites and copyright infringement.

Cybersecurity
One interesting wrinkle in the debate over SOPA is the Nov. 16 letter submitted by Sandia National Laboratories Center for Computer Sciences and Information Technologies Director Leonard Napolitano to Rep. Zoe Lofgren, who represents California’s Silicon Valley and is a leading voice of opposition to SOPA in the House.

Lofgren requested the expertise of Napolitano, a world renowned cybersecurity expert, to examine the details of both House and Senate bills, and provide feedback on the details of the legislation.

“This analysis from one of our nation’s top cybersecurity experts is the definitive word that this legislation would undermine Internet security efforts and would harm the Internet,” Lofgren said in a statement. “Their assessment as experts at our national lab gives us the final answer as to whether these bills would endanger our security. They would.”

According to its mission statement, Sandia National Laboratories is “involved in a variety of research and development programs to help secure a peaceful and free world through technology,” tasked with the government’s responsibility to “protect our national infrastructures.”