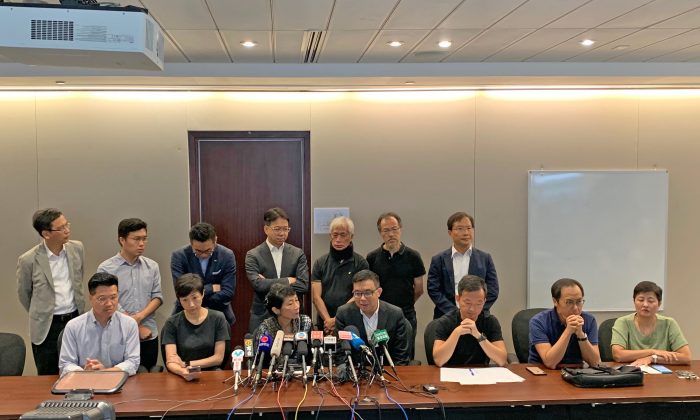 An open letter, allegedly written by a group of policemen, claims that the deputy director of the Hong Kong Police Force colluded with local mafia to plot the violent attack at Yuen Long subway station on July 21.

The letter calls for an independent investigation and removal of all top police officials found guilty of delinquency in handling the attacks on peaceful demonstrators.

The letter was posted on July 30 on Hong Kong’s popular website LIHKG Forum, often referred to as Hong Kong’s version of Reddit. The authors identified themselves as “a group of policemen with a deep love for Hong Kong,” and posted pictures of police uniforms and badges as proof of their identity.

“We are a group of police officers, including both chief Superintendent and ordinary policemen. We believe it is our duty to weed out the wicked and help the law-abiding citizens live in peace,” the open letter stated.

It went on to blame police chief Stephen Lo Wai-chung for blindly following orders from the Hong Kong government, calling him “slave Chung.”

“The Police Commissioner, slave Chung, lacks moral courage, political wisdom, sense of responsibility, and does not care about fellow policemen’s safety … As a result, our fellow police suffer injuries, face pressure from both supervisors and the public, which in turn, has caused low morale and burnout,” the letter said.

Around 11 p.m. on July 21, a group of masked men in white T-shirts, armed with sticks and metal rods, attacked protesters at the Yuen Long subway station. The protesters were on their way home after a march against the extradition bill and were easily identifiable, as most of them wore black or grey shirts. Forty-five people were injured by the mobs, including journalists and lawmakers.

The extradition bill would allow the Chinese regime to seek extradition of criminal suspects, and many Hongkongers are worried that the city government would be pressured to hand over individuals to face trial in mainland China, where critics say their legal rights would be threatened.

According to Zachary Wong Wai-yin, a legislative council member representing Yuen Long, local residents called the 999 police hotline starting at 7 p.m. when they noticed over 100 men in white T-shirts gathering. But no police showed up for the next three hours. He also said that he obtained information that these men were gangsters from Yuen Long and Tuen Mun.

The letter claims that Chris Tang Ping-keung, the deputy director of the Hong Kong Police Force, has close ties to gangs in Yuen Long, and said that local police were intentionally dispatched to other regions before gang members launched their attack on protesters at the subway station.

The open letter also claims that in Yuen Long, the police, the local gangs and the local rural committee have deep and complicated connections. Specifically, it said that Chris Tang had formerly served as head of the Yuen Long police force between 2012 and 2014, where he became a close ally of Junius Ho Kwan-yiu, a pro-Beijing law-maker and politician.

Junius Ho was filmed laughing and shaking hands with men in white T-shirts on the night of the mob attack, Reuters reported on July 26.

According to the letter, Tang and Ho meet with local thugs and mafia regularly for entertainment and to discuss how they might benefit each other. Local thugs try their best to please Tang and Ho, providing them with the best food and beautiful women.

The letter further revealed that on the evening of July 21, almost all policemen at the North District, the nearest police station to Yuen Long subway station, were away from their office. Some had been ordered to stay at the government building, the center of mass demonstrations, and some were purposely dispatched to other regions.

As a result of police absence, the gangsters were able to beat civilians at will for hours.

The authors of the letter stated that the misconduct of the police officials involved in the Yuen Long mob attacks has caused numerous injuries to people and seriously damaged the good reputation that Hong Kong police has acquired during the past 175 years.

As a group of conscientious police, they said, they were deeply saddened and are calling on government leaders to remove the director, deputy director, assistant director, senior superintendent of Hong Kong police and chief superintendent of Police Public Relations Division from their posts, or to suspend their jobs and turn them to the Hong Kong Independent Commission Against Corruption for an investigation.

They warned of disastrous consequences if there is no timely punishment or investigation of Tang and Lo.

“We have to resolve the current mess quickly and draw lessons from it. We need to have a fresh start to be able to restore public trust in Hong Kong police. Otherwise, more and more police with mafia background will infiltrate our police force,” the letter states.

It is widely expected that 54-year-old Chris Tang will be promoted to the director’s position when current police chief Stephen Lo reaches the retirement age of 57 in November.