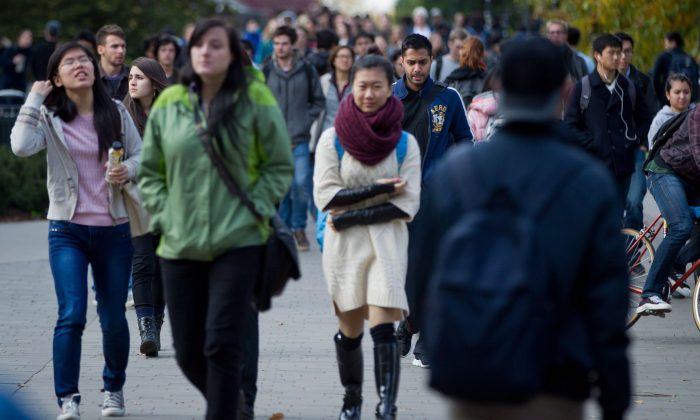 By the time Emily Aubé was 12 years old she was having daily, crippling panic attacks that left her feeling like she was dying.

Aubé had always been an anxious child but in junior high school her attacks progressed to the point that she couldn’t attend classes regularly, her personal relationships were strained, and basic functioning was a constant struggle.

“When you’re a child and you don’t really know what’s going on it’s traumatizing,” says Aubé, a university student and mental health activist who hails from Barrie, Ontario.

“[During a panic attack] you feel like you’re going crazy, your heart’s beating fast, you don’t have control of your body—it is a very scary feeling.”

It was a visit to her local walk-in clinic that helped diagnose Aubé with panic disorder and generalized anxiety. That visit also became the first step toward healing.

Along her journey of self-discovery through therapy, medication, research, and exploring spirituality, Aubé, now 19, regularly blogged about her struggles and triumphs. One blog post she wrote earlier this year for Bell Let’s Talk Day went viral on social media, which led to the realization that she wasn’t alone in her experience.

The positive response prompted her to launch an online support group, Anxiety Free Community, to help others struggling with anxiety and panic disorders. The site quickly attracted teens and young adults from across Canada.

“I’m not a doctor so I can’t be diagnosing anything, but it’s just a safe place to talk about our struggles, our accomplishments, what we’re working on day-to-day,” says Aubé. “Just to support each other, to just really get that feeling that we’re not alone in our disorder.”

According to the Canadian Mental Health Association (CMHA), 10 to 20 percent of Canadian youth are affected by a mental illness or a mental health disorder.

Many schools and post-secondary institutions have flagged student mental health as an urgent priority needing more attention in recent years, as the demand for support services continues to increase.

In July, the Canadian Alliance of Student Associations, made up of 22 student associations representing 280,000 young people, released a policy paper calling for a national action plan on adolescent mental illness.

Among the barriers to treatment for students is a lack of cohesion and collaboration at the Pan-Canadian level, stigma associated with mental illness, and lack of data collection and funding in the sector, cites the paper, which urges the federal government to adopt its proposals.

When considering how to improve mental health services for students, policy makers must be cognizant of the specific behaviours and habits of teens and young adults, says Aubé. In her case, she avoided talking to the school counsellor because she felt an adult couldn’t relate and wouldn’t be able to offer useful guidance. Fear of stigma amongst her peers and being labelled as “crazy” was also a block to seeking help.

Costly medications and therapy sessions aren’t always an option for young adults, many of whom work minimum wage jobs or are living on their own for the first time, she adds. This treatment gap has brought many youth who have already been diagnosed with a mental illness to her website, often as a last resort when they couldn’t find effective support elsewhere.

“I find that the traditional way [of getting help] is really intimidating for teens, and because there’s not the relatable aspect, that’s what teens are craving,” says Aubé. “We want to feel like we’re in this together.”

The community she formed has been a major boost in her own recovery, notes Aubé, who has been medication-free for three years and describes her current mental state as “amazing.” She also credits her spiritual beliefs and meditation, as well as her own personal determination, as a fundamental part of healing.

Aubé hopes to continue helping others and, through her website, now offers coaching services for those grappling with anxiety. She has also written “Love before Fear,” a self-help and anxiety healing guide due for release in the fall.

Although she is currently enrolled in the journalism program at Ryerson University, she sees a future in mental health advocacy and hopes to give talks to students at all levels to spread her message of hope.

“I want to go into elementary schools, high schools, colleges, and universities,” she says. “I really want to spread this message and bring awareness of what mental health issues actually are, and then how to bring about a recovery.”