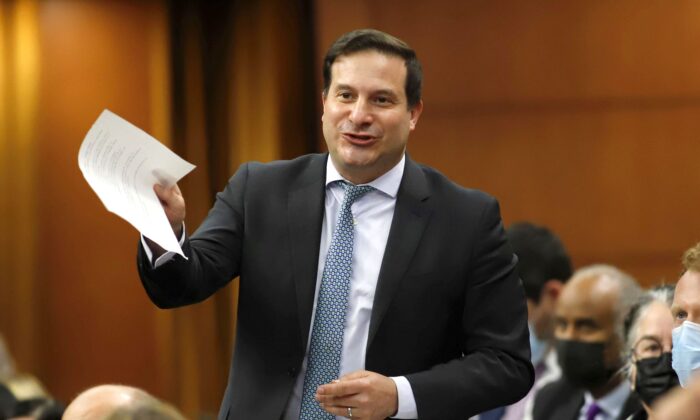 Public Safety Minister Marco Mendicino rises during question period in the House of Commons in Ottawa on May 12, 2022. (Patrick Doyle/The Canadian Press)
Canada

“[Heritage] Minister Rodriguez and others within our government are leaning in on this and will bring forward the legislation as quickly as possible,” Mendicino said during a press conference on Aug. 29.

Bill C-36, which lapsed when the last Parliament ended, aimed to amend the Canadian Human Rights Act to target online hate speech and proposed fines of up to $70,000 for any internet users who were found by an inquiry to have expressed “detestation or vilification” of groups or individuals based on “a prohibited ground of discrimination,” such as their religion, ethnicity, or sex.

The bill would not affect online speech that expressed “mere dislike or disdain or [if] it discredits, humiliates, hurts or offends.”

Heritage Minister Pablo Rodriguez announced in March 2022 that the government had assembled a panel of 12 experts to provide cabinet with advice on drafting its new online harms regulation bill.

The panel advised the government to address online “disinformation” in the new bill, although it admitted that clearly defining the term in legislation would be a challenge.

Some experts on the panel also advised that the government address “legal yet harmful content” in the legislation—that is, information not deemed illegal by Canada’s current hate speech laws.

The government asked for feedback about the legislation in its 2021 “Technical Paper and Discussion Paper,” and in a subsequent report said that “only a small number of submissions from those stakeholders were supportive” of the internet censorship framework.

“Respondents identified a number of overarching concerns including concerns related to the freedom of expression, privacy rights, the impact of the proposal on certain marginalized groups, and compliance with the Canadian Charter of Rights and Freedoms more generally,” reads the February report, “What We Heard: The Government’s Proposed Approach To Address Harmful Online Content.”

Mendicino said on Aug. 29 that the government is taking the feedback into account as it drafts the new legislation.

“Minister Rodriguez and [Justice] Minister Lametti and others within our government are very eager to take the feedback that they have received to improve on the original draft of the legislation so that it ensures that the people can have robust free speech,” he said.

Mendicino added that the government will still set “some clear boundaries on what is not acceptable.”

He also said he wants social media companies to assist the government in regulating hate speech on their platforms.

“We need social media to step up,” he said. “We need to see all of the big social media players keep up their end of the bargain when it comes to being transparent about how they’re ensuring compliance with their own standards so that living online can be as safe as in our communities.”

Mendicino did not specify when the Liberals plan to table the proposed legislation.

Lee Harding and Noé Chartier contributed to this report.