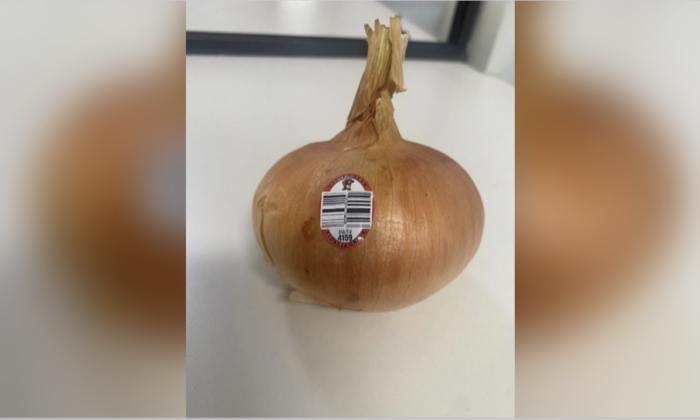 A photo of a Vidalia onion subject to a recall. (FDA)
US News

Onions that were sold in stores in five states have been recalled due to possible contamination with listeria, the Food and Drug Administration (FDA) said in a notice.

The agency said in the notice that A&M Farms of Lyons, Georgia, has issued a voluntary recall of whole Vidalia onions that were packed on a single pack line between June 20 and June 23 because they could be contaminated with listeria.

Listeria is an organism that in healthy individuals typically only causes short-term symptoms like high fever, severe headache, and diarrhea. But it can cause serious and sometimes fatal infections in people with reduced immunity, young children, and frail or elderly people.

The FDA said that, to date, there have been no reports of illnesses or adverse events related to the recalled onions.

The onions were sold in bulk in the produce section of stores in Florida, Georgia, Massachusetts, New York, and Pennsylvania between June 22 and June 24.

The recalled Vidalia onions can be identified by the purchase location as well as PLU or lot numbers provided by the FDA.

Aries Haygood, the co-owner of A&M Farms, said in a statement that most of the affected onions never made it to the stores.

“We stopped packing on the implicated line, and I am personally overseeing a full cleaning and sanitation of the equipment and an internal review of our processes,” Haygood said.

“The health and safety of consumers are our top priorities here at A&M Farms. We are glad that most of the implicated product never reached stores, but we are focused intently on alerting consumers in those areas that did receive the onions,” he added.

It comes as the Centers for Disease Control and Prevention (CDC) recently identified one death and nearly two dozen hospitalizations across ten states tied to a listeria outbreak in a food product that has not yet been identified.

The agency said that most of the sickened individuals either live in Florida or traveled there in the month prior to falling ill.

Investigators have yet to determine the source of the outbreak and the significance of these findings is still under investigation, according to the CDC.