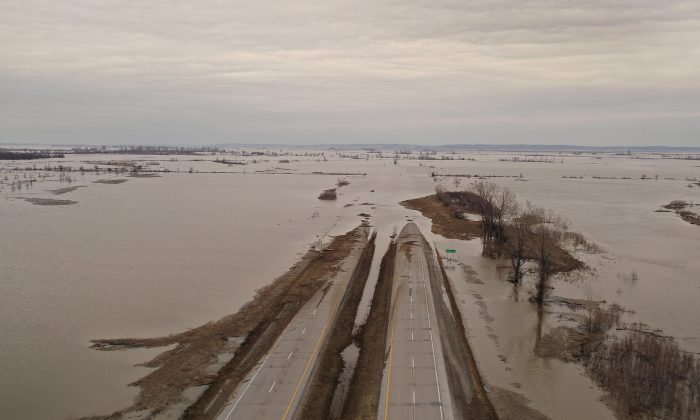 Floodwater covers Highway 2 near Sidney, Iowa on March 23, 2019. This year, midwest states have battled some of the worst flooding they have experienced in decades. (Scott Olson/Getty Images)
US News

In a video uploaded to his Facebook page, California resident and financial advisor Ron Sterud recently shared images of the flooded Missouri River that seemed to be making few headlines across the country.

In the footage, the water could be seen encroaching Interstate 29 as the driver traveled through Perceval, Iowa, telling viewers the scene was “heartbreaking.”

“Why are we not hearing about this in the mainstream media?” said the July 16 post on Facebook accompanying the video.

In the video, the water inched close to the road, however the river is normally 10 miles away, said Sterud.

“It is devastating,” he is heard saying. “Almost every single road, from Omaha to where I am now, which is about 50 miles south, [are flooded], and we hear nothing about this.”

According to the Army Corps of Engineers, the Missouri River basin had experienced over a year’s worth of runoff by May this year after just three months of heavy rains. But while the flooding received some media attention at the time, dramatic footage of river waters covering roads did little to ensure continued attention regarding the natural disaster and the communities being impacted by it.

Unlike recent disasters such as the California wildfires or hurricane Michael, which hit Florida, Georgia, and the Carolinas in October, flooding in Iowa isn’t bringing the nation’s attention to the region. But despite the lack of coverage, floods are often the most damaging of all natural disasters, affecting a greater number of people than other events.

According to ReliefWeb, flooding is so harmful that it accounted for 24 percent of the total deaths from all of 2018’s natural disasters. With the Midwest now in particular danger, people like Sterud are wondering why the media isn’t more attentive.

On the ground in Iowa, the California resident told The Epoch Times that it doesn’t seem that two months have gone by since the worst of the flooding hit the region.

When he stopped by Cubby’s, a local gas station off Interstate 29 in Perceval, Iowa, Sterud said that at least one of the employees who talked to him felt local communities were being ignored.

“‘No one is talking about this. Our community is hurting,’” the cashier reportedly told him. “The land that produces the country’s food is being largely ignored.”

When asked why he believes the devastation isn’t catching the attention of news outlets right now, especially as local officials brace for worsening conditions, Sterud said that he believes people in the MidWest are self-reliant.

“They aren’t complainers,” he said. Unfortunately, the financial adviser added, they are also in “Trump country.”

“The media also has an agenda. All the flyover states that voted for Trump are [being ignored],” he said.

In the 2016 presidential election, President Trump won both Iowa and Missouri. In the following months, the Midwest as a whole was the target of partisan attacks because of the region’s support for the president, with some even arguing that flyover states were “holding America hostage.”

To some observers like Sterud, it looked like the natural disaster was not enough to prompt the media to put their dislike of President Donald Trump aside to cover the compelling stories coming from the region. Furthermore, some coverage seemed to actually ridicule locals.

As Missouri officials requested more flood assistance from the federal government, and CNN reported that damage to the Missouri River levee system could make flooding much more likely this summer, the Washington Post chose to report that Midwest towns aren’t giving up on their waterfront property plans despite worsening floods.

In the end, mainly small outlets with limited national outreach appeared to cover the real-world stories of local farmers hurting because of the worsening floods. And thanks to them, readers could see that people like the cashier who talked to Sterud aren’t alone.

“In the Midwest, people are hearty,” the financial adviser said. “They take care of themselves, but [being ignored by the media] is taking its toll. They feel unheard.”

Experts believe that during the current season, thousands of residents in the area that stretches from Yankton to St. Charles in Missouri could be directly impacted by the Missouri River floods. While this might be news to the rest of the country, that isn’t the case for locals.

Between March 2018 and March 2019, there have been 218 flash floods reported in the state of Missouri alone, with at least one recent flood in Jefferson City submerging Highways 61 and 67.