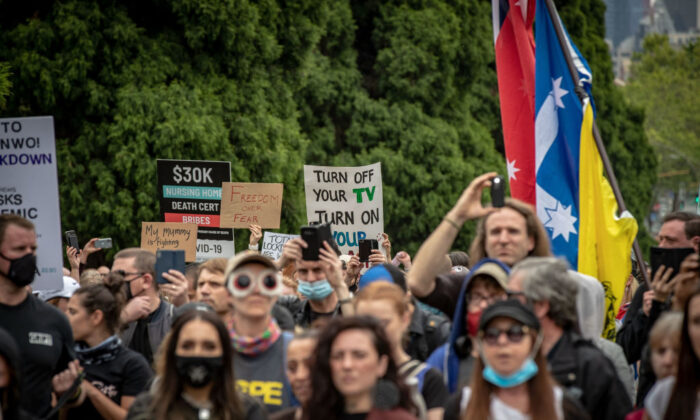 A large crowd gathers to protest at the Shrine of Remembrance on October 23, 2020 in Melbourne, Australia. (Photo by Darrian Traynor/Getty Images)
Australia

Hundreds of protesters have marched into Ballarat, the historic home of Australia’s most famous uprising against a state government, on Sunday in opposition to Victoria’s vaccine mandate and new pandemic laws.

Forming a convoy in Melbourne at 11 a.m., protestors moved through the city and onto the city of Ballarat, which is famous for being the birthplace of Australia’s most well-known rebellion in 1854 at the Eureka stockade.

MP and leader of the United Australia Party Craig Kelly, who attended the Ballarat rally, called it a “historic occasion.”

Kelly said the protest was similar to the Eureka Stockade of 1854, where gold miners built a stockade at Bakery Hill, Ballarat, to protest how the colonial government ran the goldfields.

The failure of the colonial government of the time to listen to the miners led those involved in the rebellion to swear allegiance to the Eureka flag, which they argued stood for liberty and freedom. Although the uprising ultimately failed, it was a key event in developing Australia’s representational structures and attitudes towards democracy and egalitarianism.

Kelly told the crowd in Ballarat that needing to be vaccinated in order to keep your job was unethical and “un-Australian.”

The leader of the United Australia Party also addressed the Melbourne protestors the previous day, calling the vaccine rollout a “global medical experiment.”

“I am no longer in a great city. I am here in a fascist, medical state,” he said. “In the next election … we are going to fight for the people, fight for the freedoms of Victorians,” he said.

The protest follows similar demonstrations in Melbourne on Saturday, where tens of thousands of residents took to the CBD, calling for freedom of choice and an end to vaccine mandates and COVID-19 restrictions.

Meanwhile, not everyone agreed with the protesters’ use of Ballarat and the Eureka movement for the anti-vaccine mandate rallies.

Reclaim the Radical Spirit of the Eureka Rebellion organiser Dr Joseph Toscano said that it was “deranged and ludicrous” to imagine Ballarat miners would have wanted people all these years later to potentially spread disease, “putting neighbours’, friends’, and families’ lives in danger,” the  Herald Sun reported.

“To clamber on the Eureka bandwagon is a travesty of everything the Eureka miners and their families and supporters and friends fought and died for,” Toscano said.

The ongoing protest comes on the back of a mandatory vaccination order for the vast majority of Victorian workers, requiring them to be fully vaccinated by Dec.16 or lose their jobs,  as well as the controversial “Pandemic Management Bill”.

The Bill, which passed the state parliament on Thursday and will be enforceable on Dec.16, will replace the state of emergency powers and give the Victorian premier and health minister the power to declare a pandemic and enforce restrictions.

While the Victorian government has said the bill would increase transparency, it has drawn considerable criticism from many, including legal groups, the ombudsman and Opposition, who were concerned about potential human rights violations, ABC reported.

These opponents also called for greater oversight and checks to be included.

As a result, multiple amendments were made to the original bill, enabling it to garner enough support to pass through the upper house.

The Human Rights Law Centre (HRLC) welcomed the amendments, which included establishing a new right for people to appeal their detention, making it easier for Parliament to disallow unjustified restrictions, removing the broad and vague aggravated offence from the bill, and ensuring the law will be independently reviewed two years from now.

Legal Director of Human Rights Law Centre Daniel Webb said that while the new bill isn’t perfect, it’s a significant improvement on the existing law. Additionally, they argued that human rights and transparency safeguards are now included—like greater transparency around the justification for all restrictions and clear rights for people detained—differentiating the Bill from similar laws in other states.

“The safeguards in the Bill will help government make better decisions and strike the right balance between our right to life and public health and other individual rights and freedoms,” he said.

However, Webb also pointed out that the HRLC would like to have seen a limit put on the length of time a pandemic declaration can be extended, as well as specific other changes to the criteria for imposing restrictions.