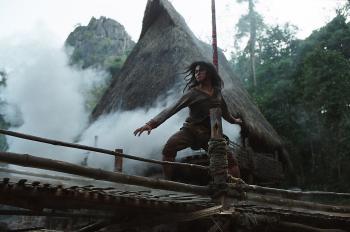 By James Carroll
Print
Ong-Bak introduced the world to the artistry of supreme ass-kicker Tony Jaa. Ong-Bak: The Beginning introduces to the world the ass-kicking supreme artist Tony Jaa.

The Beginning is only Jaa’s third film as leading man. It already sees him, however, taking the great leap from star and choreographer to star, choreographer, co-writer and co-director (alongside long-term collaborator Panna Rittikrai). Not without a price though, if rumours are to be believed, as the punishing schedule resulted in some form of mental breakdown and he headed off into the Thai jungle halting production for many months. Not that there’s any sign of this in the final sublime product.

In fact The Beginning stands as the strongest Jaa vehicle so far thanks to a much more rounded narrative than either Ong-Bak or The Warrior King. Which, for all their unabashed awesomeness, were essentially movies made up of loose and unfocused dramatic scenes that showcased extraordinary fighting skills and unbelievable action set-pieces.

An epic tale of one man’s lifelong fight for survival, The Beginning is set in ancient feudal Thailand and follows the training of orphan boy Tien (good Jaa youngalike Natdanai Kongthong) by guerrilla freedom fighters in order to become the ultimate warrior to lead their uprising. Upon reaching manhood (and morphing into Jaa) however, Tien instead seeks vengeance and embarks on a series of assassinations against the people that brutally massacred his family. Thus begins a series of the most jaw-dropping fight sequences ever seen on the big screen.

But then, of course, the quality of the abundant fight scenes was never in doubt, Jaa already world famous for his lightning-fast moves and 100 per cent real, non-wire or CGI-assisted stuntwork (the boy must have adamantium for bones for real, the impacts he absorbs and the rigours he continually puts his body through). What this man can do is nothing short of unreal.

What does come as something of a surprise though is the equally assured hand Jaa shows from behind the camera as well, The Beginning so opulent and grand at times that you could mistake it for a Zhang Yimou picture. The boy also knows how best to capture his singular moves. He doesn’t over-edit. He has no use for voguish shaky-cam. He doesn’t loop over and over his biggest moves (well, maybe just once…). Instead he keeps the camera stock still to best capture the action. It’s mature film-making and exactly what was required for this movie.

Of course it was a shame to see the successful partnership between Jaa and Prachya Pinkaew come to an end after only the two films. But it doesn’t seem to have had any lasting effect on the talented Pinkaew’s career (his latest was the tasty Chocolate that saw him unveiling newest Muay Thai sensation JeeJa Yanin) and, despite difficulties along the way, it certainly hasn’t hurt Jaa’s but ultimately enriched it. One thing’s for sure, at least on this evidence, Jaa definitely has a career as a successful director ahead of him when he decides to hang his weapons up, as he is obviously equally adept at pointing a camera as he is cracking skulls.