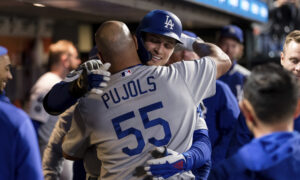 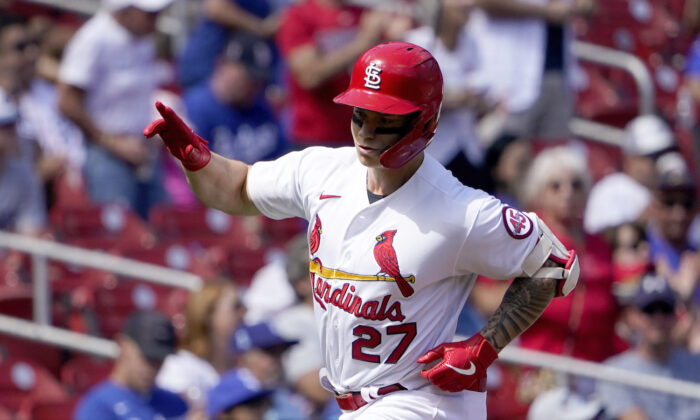 St. Louis Cardinals' Tyler O'Neill celebrates as he rounds the bases after hitting a solo home run during the fifth inning of a baseball game against the Los Angeles Dodgers in St. Louis on Sept. 9, 2021. (AP Photo/Jeff Roberson)
Southern California

ST. LOUIS—Tyler O’Neill hit a tiebreaking homer, Cardinals relievers combined for five scoreless innings, and St. Louis salvaged a split of its four-game series against the Los Angeles Dodgers with a 2-1 win on Sept. 9.

The Cardinals climbed within three games of the San Diego Padres for the final NL wild-card spot, while the Dodgers fell 2 1/2 games behind the NL West-leading San Francisco Giants.

“Two-and-a-half games is not very much,” Dodgers shortstop Trea Turner said. “A lot of things can happen in the last 20 games and I don’t try to watch the scoreboard or pay attention to that stuff. You try to control what’s in front of you and today was this game and didn’t get the job done so we move on to tomorrow.”

“He’s really grown into the consistent player that he really wanted to be and is capable of,” Cardinals manager Mike Shildt said. “He’s prepared for every at-bat. This is a sharp kid. He does his homework.”

The homer made a winner out of Alex Reyes (6-8), who pitched two scoreless innings in his fifth appearance since being demoted from the closer’s role.

“I’m feeling healthy and my arm’s feeling good,” Reyes said. “As a competitor I’m willing to pitch wherever and whenever my name is called go out there and get quick outs.”

Cardinals catcher Andrew Knizner said Reyes came through in a pivotal part of the game.

“His stuff was coming out good,” Knizner said. “Fastball was good. Slider was good, mixing all of his pitches. And I think if you go back and look at the game, his innings right there kind of set the tone for the back half of that game.”

T.J. McFarland and Luís Garcia combined for two scoreless innings to bridge the gap to Giovanny Gallegos, who earned his sixth save with a perfect ninth.

“Just that time where results matter,” Dodgers manager Dave Roberts said. “And so, the process has been good and we still got to just keep grinding and expect good things happen.”

Dodgers right-hander Tony Gonsolin, who was activated before the game, threw 55 pitches in three innings in his first start since July 30. He had been sidelined with right shoulder inflammation.

Cardinals righty Jake Woodford threw 66 pitches in four innings while making his first start since being recalled from Triple-A Memphis on Sept. 3. He surrendered Turner’s RBI single in the third.

“It’s a great lineup, especially at the top,” Woodford said. “I thought they made some adjustments and I kind of dug myself in the hole a little bit there too, so definitely some stuff to work on and go back and review.”

Albert Pujols received another standing ovation from the 31,173 in attendance as he walked to the plate for a pinch-hit appearance in the seventh inning in what could be his final plate appearance at Busch Stadium.

Pujols drew a walk, which drew boos from the crowd who wanted to see the Dodgers slugger swing the bat one last time.

Turner also extended his career-best hitting streak to 16 games with a first-inning double. It’s the longest streak for a Dodgers player this season.