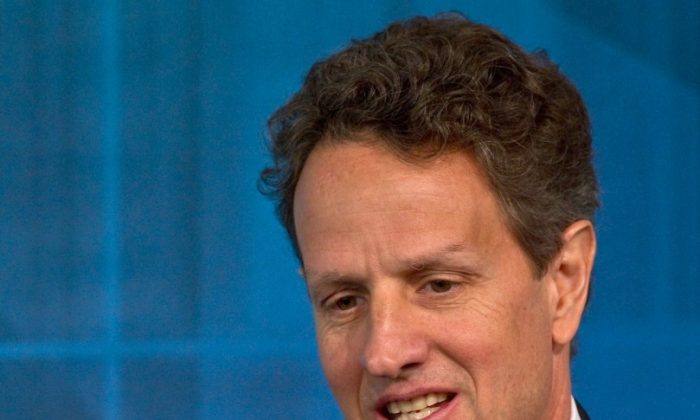 U.S. Treasury Secretary Tim Geithner addresses a conference ahead of the spring meetings of the International Monetary Fund in Washington in this file photo from April 2011. (Nicholas Kamm/Getty Images)
Business

One Year After US Loses AAA Rating

Something happened on Aug. 5 last year that not many people in the world of business and finance even thought was possible. Naturally, Secretary of the Treasury Tim Geithner was certain that the United States could not lose its AAA rating. In an interview with Fox Business reporter Peter Barnes on April 25, 2011, he confidently affirmed that there was “no risk” of a downgrade in the U.S. credit rating.

The downgrade did happen, however, as ratings agency S&P lowered the long-term sovereign rating of the United States to AA+ from AAA, citing uncertainties around the debt-ceiling debate and a ballooning deficit in its press release. Being one of the “big three” rating agencies together with Moody’s and Fitch, S&P has so far maintained a negative outlook.

In what was perceived to be a seismic event, this article tries to look at the consequences one year later. For many investment portfolios, the weighted average rating of the big three agencies is the most important factor when making investment decisions, so there was no forced liquidation and many market participants still think that the downgrade did more psychological than technical damage.

Looking at some individual market metrics, the effect of the downgrade seems to have faded one year later. The CBOE Volatility Index or VIX, one common measure of equity risk also known as the “fear” index stood at elevated levels of 25 one day before the downgrade. It hit a high of 47 on Oct. 4, 2011—the prime reason for which was an exacerbated crisis in Europe—and then was on a steady downtrend, closing at 16 on Tuesday.

The yield on the 10-year U.S. Treasury was 2.47 percent on Aug. 4, 2011, and now stands at 1.63 percent, almost a full percentage point lower. So despite the lost credibility, the United States now pays a lower risk premium to fund itself than before the downgrade.

Despite the positive showing in market metrics, there is more to the story than meets the eye. In a recent statement, S&P said that there are “risks that could build to the point of leading us to lower our AA+ long-term rating by 2014.” The other two big rating agencies have also guided to a timeframe of 2013–2014 to reassess their ratings.

Last but certainly not least, there is another nationally recognized statistical rating organization (NRSRO) by the name of Egan Jones that was ahead in calling the U.S. difficulties and cut the U.S.’s AAA rating on July 16, 2011.

Egan Jones is different from other rating agencies as the Haverford, Pa., company does not accept payment by the entities that it reviews. It generates revenues by fee-paying clients in the financial industry that use its research to make investment decision. This incentive structure eliminates the conflict of interest that the big rating agencies have, as S&P, Moody’s, and Fitch are paid by the entities—corporates and countries for example—they are rating.

According to Bill Hassiepen, V.P. and co-head of the ratings desk at Egan Jones, this unique setup has allowed the company to call things as it sees them and be ahead of the other big agencies. In 2011, the big three had to ultimately follow Egan Jones in 94 percent of 383 cases, but with a time lag that would have cost their clients money. Some good examples are putting a default rating on Greece in March 2011, MF Global in the fall of last year, and Enron and Worldcom more than a decade ago, sometimes months before the other agencies followed suit.

Egan Jones downgraded the United States again in April to AA, seeing no improvements in the underlying problems. According to the April 2012 rationale, the budget deficit is estimated to be “close to” 10 percent at the end of 2012. They also see a structural reduction in flexibility as the country has crossed the 100 percent debt-to-GDP ratio.

Look Behind the Surface and Underlying Problems Persist

Hassiepen commented on the current U.S. situation in an interview with The Epoch Times and explained some of the anomalies in markets that fail to adequately reflect the underlying risk of “structural” unemployment, “reckless monetary policy,” and an economy that is growing at “snail” speed:

“[Treasury] yields are lower strictly because of debt monetization. [This is the] cumulative result of QE1, QE2, and operation twist. Banks borrow at zero from the Fed and buy Treasurys. This generates a meager return for the banks [and artificial demand for Treasurys].”

Nonetheless, Hassiepen does not think that the United States will default on its debt obligations, “Would there be a hard default on Treasurys? No. Mr. Bernanke would print more cash.”

With the Fed being already the largest creditor of the United States, however, another round of “dangerous” printing in the form of QE3, would trigger another downgrade from Egan Jones.