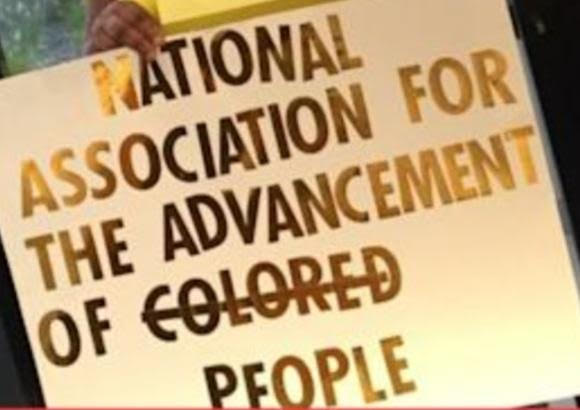 A sign held by Delia Gray as part of her 5-year "one woman crusade" to get the National Association for the Advancement of Colored People to remove the "C" from the organization's name. (Courtesy of Delia Gray)
Social Issues

One Woman’s ‘Crusade’ to Remove the ‘C’ From NAACP

Delia Gray, a 47-year-old mother of two and grandmother of two who hails from Tyler, Texas, is on a “one-woman crusade” to have the National Association for the Advancement of Colored People drop the “C” from NAACP.

“For the last five years I have been on a one-woman crusade to get the National Association for the Advancement of Colored People to change their name,” Gray told The Epoch Times. “It is offensive to me to be called a ‘colored’ person and it’s time for this organization to update their name to show our progression as a people.”

The Founders of the NAACP

The NAACP was established in February 1909 in New York City. Although not widely known, the NAACP’s founding members included white progressives.

Mary White Ovington was described by the African American Registry as “a white-American suffragette, socialist, journalist, and co-founder of the NAACP.”

Henry Moskowitz, a white Jewish–American administrator and civil rights activist born in Hușse, Romania, was the founding executive director of the League of New York Theatres, which eventually became The Broadway League, known for producing the Tony Awards.

William English Walling, described by History101 as the “extremely liberal” grandson of a wealthy slave owner, became involved in the advancement of black Americans after witnessing the horrors of Bloody Sunday, a protest sponsored by the Social Democratic Federation in London in 1887.

Oswald Garrison Villard, son of railroad tycoon Henry Villard and suffragist Fanny Villard, and publisher of both the “New York Evening Post” and “The Nation,” completely funded the NAACP’s budget and provided the organization its office space in the New York Evening Post building. The concept he envisioned, the “Committee for the Advancement of the Negro Race” (1906), became the blueprint for the NAACP.

Four African Americans were among the founding members.

W.E.B. Du Bois, also a socialist, was the first black American to earn a doctorate from Harvard University. Du Bois opposed the idea proposed by abolitionist Frederick Douglass that black Americans should integrate with white society and favored the “separate but equal” status. Du Bois, the only black person on the initial leadership team, served as director of publications and research.

Ida Wells-Barnett, an activist and prolific writer, was born a slave in Holly Springs, Mississippi, in 1862. After the lynching of three of her friends in 1892—Calvin McDowell, Thomas Moss, and Henry Stewart—Wells became one of the nation’s most vocal anti-lynching activists. Her friends were the owners of the People’s Grocery in Memphis. Their economic success had angered the white owners of a less successful store across the street.

Archibald Grimké, a leading intellectual, activist, and author, was also born into slavery in South Carolina on Aug. 17, 1849. In 1872, Grimké became one of the first African American students at Harvard Law School in Massachusetts. In 1884, he was chosen for the Republican Party’s state convention. Grimké also led a public protest in Washington, D.C., against President Woodrow Wilson’s segregation of federal offices.

Mary Church Terrell, a suffragist and civil rights activist, was born from former slaves in Memphis, Tennessee during the Civil War in 1863. On March 3, 1913, the day before Woodrow Wilson’s inauguration, Terrell marched with other African-American suffragists in the first women’s suffrage parade held in the nation’s capital.

Knowledge Changed Her Perspective of the NAACP

Gray confessed she didn’t understand what the initialism NAACP stood for until 2017. She thought the NAACP was there to uplift people in the black community. But once she learned what the “C” stood for, her whole perspective of the organization changed.

“Believe it or not there are a lot of people who don’t know what it stands for and when I found out what it stood for it made me feel funny,” Gray said. “I don’t want to be called ‘colored.’ So I immediately started looking up websites and started researching the history of the name. Since then, I’ve been on a one-woman crusade to get this name changed. It started in 1909 and people are still using the exact same name.”

In 2018 Gray took her “one-woman crusade” directly to the NAACP headquarters in Baltimore.

“I gave them a letter asking them to change their name and I was basically laughed out of there,” Gray recalled. “They were telling me, ‘it’s history’ and ‘there’s nothing that can be done.’ Then I went to my local chapter and it was basically the same thing. They laughed at me. But that hasn’t deterred me. I still want them to change it because it’s offensive and it holds us to the Jim Crow era.”

Jim Crow laws, named after a black character in a minstrel show in which white performers wore “blackface” and portrayed African Americans in demeaning and derogatory ways, were laws that existed from the post-Civil War era until 1968. These laws enforced segregation and denied black people the right to vote, hold jobs, or get an education. Those who dared to fight against Jim Crow laws risked being arrested, fined, and thrown in jail. Others were the victims of violence. Some were even killed. Jim Crow laws mainly appeared in southern Democrat states and during the presidency of Woodrow Wilson. Wilson spent his presidency trying to reverse all advancements made by African Americans since the Reconstruction era by forcing segregation in the federal workforce and promoting the Ku Klux Klan.

Despite the disappointment of being ignored and even laughed at by those who claim to represent her, Gray said she isn’t giving up. Gray has even started a petition, which had gained 153 signatures at the time of publishing.

“The word ‘colored’ has had a negative connotation since the early ’60’s,” Gray wrote on her petition page. “Even though the NAACP was established in 1909, they continue to not evolve and adapt to modern verbiage. We no longer want to be identified as ‘colored’ but as a different label, such as ‘Black Americans’ or ‘Americans.’ The idea of being called ‘colored’ is degrading and morally confusing. It starts to form societal identity confusion with the black community.”

Gray admits she has “had a lot of nay-sayers” over the years. But she has also had a lot of people tell her they’ve “felt the same way” she does.

Gray said her mother lived in a time when the word “colored” was used to separate them from the rest of society.

“But they didn’t say anything because that was normal,” Gray recalled. “My granddaddy told me he had a friend put in jail because he wanted to sit in the white side of a restaurant. They told him to leave and he refused to move so they put him in jail. The word ‘colored’ holds us to a lot of pain and separation and we need that to be rectified.”

Gray has also reached out to several representatives in Texas. None have responded.

“People say, ‘oh you must hate the NAACP.’ I don’t hate them at all,” Gray insisted. “They were instrumental in getting the word ‘colored’ removed from water fountains and bathrooms and restaurants. Yet they still use the word they fought against.”

The Origins of Segregation

Segregation of public facilities—including water fountains and restrooms—was officially outlawed by the Civil Rights Act of 1964.

The Civil Rights Act of 1964 passed the Senate on a 73–27 vote. The Democrat supermajority in the Senate split their vote 46 for and 21 against. The Republicans split their vote 27 for and 6 against. The no vote consisted of 78 percent Democrats. In addition, the infamous 74-day filibuster was led by the southern Democrats, who overwhelmingly voted against the act. Sen. Robert F. Byrd, (D-W.Va.), the former Klansman eulogized by then-Vice President Joe Biden as a “mentor” and “friend” at his funeral on July 2, 2010, spoke against the bill on the Senate floor for 14 hours, 13 minutes straight on his own. Despite efforts of powerful southern Democrats like Byrd to derail the legislation, former President Lyndon B. Johnson signed The Civil Rights Act of 1964 into law on July 2, 1964. Five days after former President John F. Kennedy was assassinated in November 1963, Johnson stood before Congress and said, “No memorial oration or eulogy could more eloquently honor President Kennedy’s memory than the earliest possible passage of the civil rights bill for which he fought so long.” On April 10, 2014, former President Barack Obama noted how during Johnson’s first 20 years in Congress, “he opposed every civil rights measure that came up for a vote.”

What About Those Statues?

“They keep saying ‘it’s history.’ They’re using that as their excuse for not wanting to change,” Gray asserted. “My comeback is, those statues that came down, a lot of people think they were history. To me, it’s the same thing.”

The Epoch Times reached out to NAACP President and CEO Derrick Johnson and to the leadership of the Tyler, Texas, branch No. 6232 but received no response.