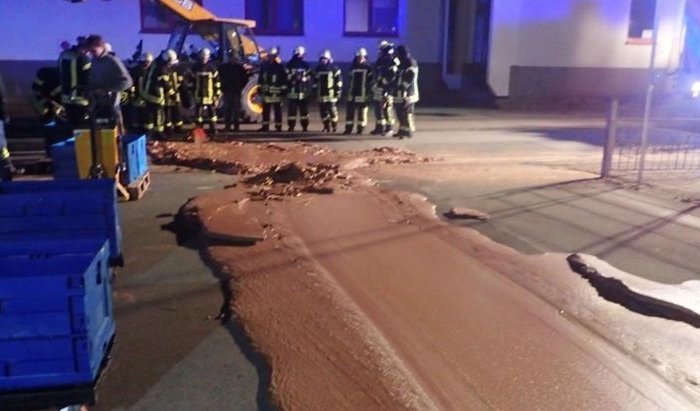 Spilt chocolate is seen on a road in Werl, Germany, on Dec. 10, 2018, in this picture obtained from social media. (WERL Fire Department/via Reuters)
Europe

One Ton of Chocolate Spills Onto Street in Germany, Forcing Cleanup With Shovels

A German street was covered with chocolate after a factory spill, according to reports.

About one ton of liquid chocolate trickled out of a nearby factory tank in Westonnen, coating the pavement before solidifying. German newspaper Soester Anzeiger said it was triggered by a “small technical defect” in a storage tank, The Guardian reported.

Firefighters were called to scrape the chocolate off the street with shovels. They also used hot water and blowtorches to remove it.

“About a ton of chocolate ran out into the yard and from there onto the street,” a spokesman for the Werl Fire Department said in a statement to Reuters.

Officials said about 108 square feet of the street was coated with milk chocolate.

“Despite this heartbreaking incident, it is unlikely that a chocolate-free Christmas is imminent in Werl,” the fire department also stated.

According to fire chief Karsten Korte, the chocolate had “already hardened” when crews arrived, The Local reported.

Chocolate production is slated to resume again on Dec. 12.

“I’m glad nothing happened at the end of the day,” company boss Markus Luckey was quoted by The Local as saying.

He didn’t know what happened to cause the chocolate spill but stated,  “It was only a small thing. There was no major damage.”

The chocolate factory is now looking “positively ahead into the future,” said Luckey.