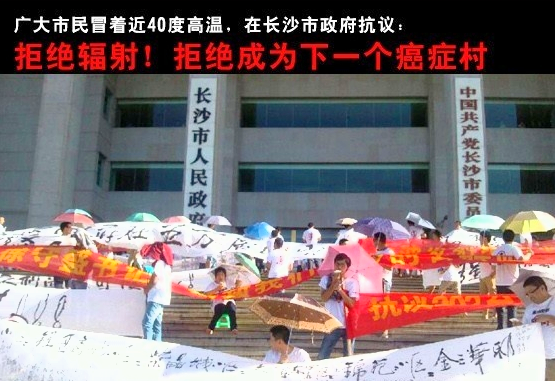 Protesters against the construction of broadcast transmission towers in Changsha hold banners, while the writing in red above says "Reject radiation! Reject becoming the next cancer village." A thousand protesters demonstrated against the project on July 29. (Weibo.com)
China

Over one thousand residents of Changsha, a city in China’s central Hunan Province, took to the streets on July 29 in 104F heat to protest a local government-led plan to erect broadcast towers in a heavily populated area of the city.

The project would see a series of medium frequency broadcasting towers, mainly to be used for television, built on a small hill in Furong District, which is the center of Changsha. The towers would have been less than 650 feet away from the closest houses. The authorities responded by dispatching anti-riot police who put down the protests.

Protesters had organized an online and street-based campaign to try to block the project. They wore T-shirts with slogans “Build the Tower, Kill the People,” and held banners saying “No right to life! Tens of thousands of people look forward to abolishing the project!”

In the online campaign the messaging attempted to hew closely to the specific concerns of the broadcasting towers, rather than making broader political demands and so allowing the authorities an excuse to retaliate. “We don’t want democracy! We just want survival,” one of the slogans said in the publicity materials prepared by the protesters.

The facticity of the chief contention of the protesters—that the electromagnetic radiation emitted by the transmission towers will be strongly deleterious to their health—is difficult to definitively establish. Research on the matter has been published in peer-reviewed scientific journals suggesting that proximity to transmission towers can have health impacts. The Australian Radiation Protection and Nuclear Safety Agency, however, says there is no scientific consensus that such transmissions are a health risk.

Whatever the niceties of scientific evidence, local authorities were not in the mood to negotiate with protesters. Instead, they sent armed riot police. “We didn’t get a response from the leaders, but instead suffered the might of special police and their vicious wolfdogs,” one part of an image they prepared, circulated online, said.

“The city government dispatched several hundred armed police and special police, and police dogs as well,” said a Changsha resident, speaking on condition of anonymity for fear of retaliation. “Physical confrontation occurred. An elderly resident was beaten and had a rib broken. Another elder suffered a bleeding ear after being beaten. Blood was all over him. He’s still in the hospital.”

The resident said that they were “sitting quietly and putting up banners” when the police arrived. He said that they contacted local media but no journalists were sent to cover the event.

Information about the protest emerged on China’s largest social network, Sina Weibo, but there were no official reports.

Protests like that in Changsha occur regularly in China, and are often suppressed violently by the authorities. A demonstration was held in May of this year in Kunming of the southern Yunnan Province, against a plan to build a new chemical plant. Thousands of residents turned out, and were also met with police, with beatings reported.

With research by Ariel Tian. Written in English by Lu Chen.